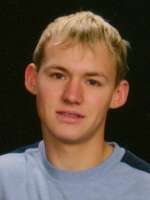 Anthony Richard Elston, 22 years old, died on December 24, 2010. Anthony was born to Jeremy Elston and Tina (Rogers) Elston (deceased) in Forth Worth, Texas on December 13, 1988. Anthony moved to Phoenix at the age of 13 and graduated from Hamilton High School in Chandler, AZ. He is survived by his father, Jeremy; his sister, Amanda; grandparents Richard and Shelley Elston, Timothy and Ann Rogers; his uncle, aunt and their daughter, Brett, Felicia & Whitney; and numerous great aunts, great uncles and cousins. He was preceded in death by his mother, Tina (Rogers) Asenbrenner and his aunt, Hollie (Rogers) Kallies.Anthony gave at least four other individuals a new opportunity for life by being an organ donor. Services are open publicly to family and friends. Visitation starts at 9:00 a.m. and Funeral Service will be at 9:30 a.m. on Friday, December 31, 2010 at Whitney & Murphy Funeral Home, 4800 E. Indian School Rd., Phoenix, AZ. In lieu of flowers, donations may be sent to NAMI, 5025 E. Washington Street, Suite 112, Phoenix, AZ 85034 or via the website http://www.nami.org

Offer Hugs From Home Condolence for the family of ELSTON, ANTHONY RICHARD