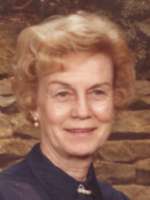 Bernice J. Esahak, nee Bernice Lindquist, passed away on February 19, 2013 in Scottsdale, AZ, at the age of 92.  She was a loving wife, mother, grandmother, aunt, and friend.  Bernice now rejoins her husband, James (“Jimmy”) Esahak, to whom she was married for 55 years before he passed on October 13, 2000.  She is survived by daughter Suzie Hull and husband Gary of Tempe, AZ; son George Esahak-Gage and wife Jane of Scottsdale, AZ; and grandchildren Jamie Jenner and husband Christopher of Savannah, GA, and Justin Hull of Tempe, AZ  She also had many nieces and nephews who will miss her dearly.  Bernice was born in 1920 in Ames, IA, and grew up during the Great Depression on a farm in nearby Fort Dodge, IA.   During WWII, she moved to San Diego, CA where she met Jimmy, a handsome sailor and excellent dancer, who became the love of her life.  They married in 1945, lived for several years in Clifton and Upper Saddle River, NJ, and later relocated to Scottsdale, AZ.  During the summers, they enjoyed taking vacations to San Diego, CA and Lake Tahoe, NV, which in later years, became their home away from home.  Bernice loved God and singing, and was a devoted member of St. George Antiochian Orthodox Church in Phoenix, AZ, where she served as the choir director for many years and developed many life-long friendships.  She was well known for her cooking and baking skills, including both Scandinavian and Arabic specialties.   Most of all, she had a special ability to nurture and encourage family and friends to pursue their individual dreams.  She will be deeply missed.  A Viewing will be held on Mon., Feb. 25, from 6 – 8 pm, Trisagion 7 pm, at St. George Antiochian Orthodox Church, 4530 E. Gold Dust Ave., Phoenix, AZ 85028.  Funeral services w/Interment at 10 am on Feb. 26 also at St. George’s.  In lieu of flowers, memorial gifts may be made to the Church.

Offer Hugs From Home Condolence for the family of ESAHAK, BERNICE J.