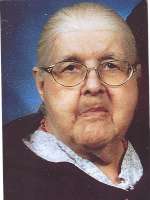 92, born February 28, 1918 passed away May 31, 2010. Preceded in death by her husband of 41 years, Ray Calderon Escobar. U.S. Army Veteran, she is survived by her children Rosalinda M. (Johnny) Norman of South Jordan, Utah and Ray Escobar, Jr and Ed A. (Nancy) Escobar of Phoenix. There are 7 grandchildren: Reha Escoto, Johnny Norman, Jr., Eddie C. Escobar, Michael Escobar, Sandra Madrigal, Anthony Escobar and Amy Martin. There are 13 great-grandchildren. Margaret was the oldest of 4 brothers and sisters; Alice Harris, Georgie Harris and Eddie Harris. Margaret’s parents were Arizona Pioneers; Carmen Jerez born in Tucson, Arizona Territory in July 1886 and George A. Harris born August 1875 in Kansas City, MO. Margaret was born at home in downtown Phoenix at what is now Central and Van Buren. She and her family of brothers and sisters lived in Los Angeles CA for a period of time and later returned to her native state to marry and raise her 3 children. Visitation will be from 6:00-8:00 pm with a Rosary at 6:30 pm, Monday, June 7, at Immaculate Heart of Mary Catholic Church, 909 E. Washington Street. Funeral Mass is at 10:00 am, Tuesday, June 8, also at Immaculate Heart of Mary. Interment will follow at St. Francis Catholic Cemetery.

Offer Hugs From Home Condolence for the family of ESCOBAR, MARGARET