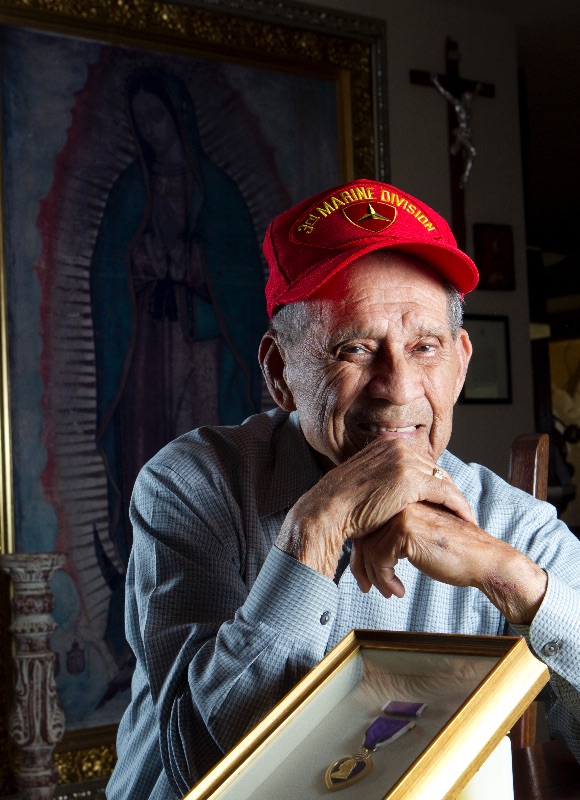 ESPINOZA, ROBERT V.
A LEGACY OF FAITH, LOVE, AND SERVICE TO HIS COUNTRY
Robert V. Espinoza (96), father, grandfather, great-grandfather, and great-great grandfather died peacefully at his home on Sunday, February 18th, surrounded by his beloved family. He was preceded in dead by Ernestina Carrillo-Espinoza, the love of his life. Robert was a first generation Mexican-American, born in Phoenix, Arizona, on July 6, 1921. A devout Catholic, Robert always taught his kids about Gods’ and our Blessed Mother’s unconditional love. Robert will be forever remembered by his beloved children Tommy (Elvira), Robert, Jr. (Lolly), Ricky (Wanda), Jimmy (Emily), Sandra (Ted), his 16 grandkids, 51 great grandkids and 16 great-great grandkids. Robert enlisted himself as a Marine to defend his country during WWII, and was wounded in Guam. Despite his wounds, he helped a group of his company’s soldiers to reach their battalion. Robert received the Purple Heart Medal from president Harry Truman. “For wounds received in action in the South Pacific during WWII. July 24, 1944. He always proudly said: “Once a Marine, always a Marine.”
Robert worked and retired from APS and lived a great life with his family. He loved Western Movies and Mexican songs by Eydie Gorme and Los Panchos and to smoke cigars. He spent time traveling (cruises) overseas. Robert always said that his faith in God and the love of his family provided him with the strength and courage to keep going in life.
Robert will be forever missed. May he Rest in Peace in the arms of our Lord. On Friday, February 23, 2018 a Visitation will be held at 9:00 A.M., with a Rosary prayed at 9:30 A.M., followed by a Funeral Mass to be celebrated at 10:00 A.M., at Saint Mary’s Basilica, 231 N. 3rd Street in Phoenix. Arrangements entrusted to Whitney & Murphy Funeral Home.

Offer Hugs From Home Condolence for the family of ESPINOZA, ROBERT V.