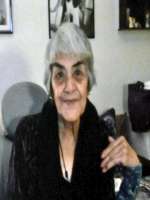 Mary was proud of having worked 25 years at Motorola in Phoenix.  She and Manuel celebrated life together by sharing their love and home with family and friends, dancing the night away and enjoying vacations in Las Vegas.  In her later years, Mary enjoyed meeting new friends during her various social activities and laughing with her beloved grandchildren who only knew her as “Nani”. She met her life’s later challenges with grace, humility and dignity. We will always love and miss you Nani, but are comforted in knowing that you are together once again with your husband. A Memorial Service will be held at 6:00 pm, Wednesday, December 18, 2013 at the Whitney & Murphy Funeral Home, 4800 E. Indian School Road, Phoenix.

Offer Hugs From Home Condolence for the family of ESQUER, MARY R.