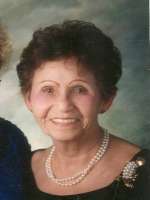 a Phoenix centenarian, passed into eternal life after a brief illness in the early morning of January 17, 2011. At the time of her death she was surrounded by her family. Ruby was born in the city of
Globe, Territory of Arizona on May 27, 1910 to Vicente R. López, a native of Tucson and Mercedes García a native of Phoenix. Her parents were the proprietors of a hardware and general store in the Pinal County mining town of Sonora where she attended elementary school. After graduating from neighboring Ray High School in 1928, she attended Tempe Normal, now Arizona State University. In 1932 she married Ralph Estrada of Tempe. She was predeceased by her husband, her son Lionel Estrada, her infant daughter, Olivia Estrada, her grandson, David Estrada, her parents, her three brothers, Arnoldo, Ronaldo and Osvaldo López and three sisters Amalia Mazy, Lilia Méndez, and Otila Solares. She is survived by her sisters, Dora Angle, Elidia Vanegas and Josephine Austin. She is also survived by her daughter, Mercedes McCormick and sons Carlos and George Estrada as well as her daughter-in-law, Margie López Estrada, and 21 grandchildren and 20 great-grandchildren, soon to be 21 great-grandchildren. Ruby was a loyal alumna of Arizona State University who deeply valued education, especially for Arizonans of Mexican ancestry, and instilled in her progeny the determination to persevere and succeed in all their academic and vocational endeavors. Ruby was an active and loyal member of the Democratic Party who never missed participating in an election. Even into her final days she was a well-informed and avid follower of current events especially regarding local and national politics. Her interest in international affairs increased when she accompanied her lawyer husband after his appointment by President John F. Kennedy to head the US AID diplomatic mission to Nicaragua.
She leaves behind an extraordinary legacy of loving care and loyalty for a family that adored and revered this exceptional woman. Visitation and recitation of the Rosary is scheduled for Sunday, January 23, 2011, 6 to 8 P.M. at Whitney & Murphy Funeral Home, 4800 E. Indian School Rd., Phoenix. A Funeral Mass will be celebrated on Monday, January 24, 2011, at St. Francis Xavier Church, 4715 N. Central Avenue, Phoenix at 10 A.M., followed with final placement in the mausoleum at St. Francis Cemetery, 2033 North 48th Street in Phoenix. In lieu of floral remembrances the family suggests contributions to the Dr. Nelba Chávez Child/Family Center of La Frontera, Inc., a behavioral health center, 504 W. 29th St., Tucson AZ 85713, and/or to the Mexican American Legal Defense and Education Fund (MALDEF), 634 Spring St., 11th Floor, Los Angeles, CA 90014 and/or to A New Leaf, a social service agency, 868 East University Drive, Mesa, AZ 85203.

Offer Hugs From Home Condolence for the family of ESTRADA, Ruby