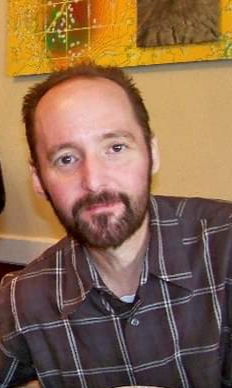 Brett F Evans, 50 – beloved son, brother, and uncle – of Glendale, Arizona, passed away on October 22, 2019. He was the baby of the family and is survived by his mother, Connie J. Evans; sister, Diane Evans-Bjorem; brother-in-law, Mark Bjorem; nephews Mark Malone and Samuel Malone, and niece Mollie Malone. He is preceded in death by his father, Tad F. Evans.
Brett was the funniest person alive with an incredible sense of humor. Every time he spoke, someone was cracking up. He mastered several impressions that kept everyone in stitches. He was an avid reader and a total nerd – he loved Star Wars and Star Trek, saw every movie and read every book.
As a child, he played every sport, was into BMX bikes, and played the drums in marching, symphonic, concert and jazz band from grade school through college. Like his father, he was deathly allergic to peanuts, so his family constantly teased him that if he stepped out of line, they would feed him peanut butter cookies.
He loved music more than anything and was an extraordinarily talented drummer. He attended Apollo High School where he graduated in the top 3% of his class. He went on to ASU where he was especially proud of the fact that he was a member of the ASU marching band, an audition that is difficult to pass for percussionists. His love for music began early, and he somewhat scared his parents when he started bringing home KISS and Black Sabbath albums by age 12. He loved the Beatles and Van Halen most of all.
After college, he began working for his father in the land title Industry, ultimately ending his career in the hospitality industry. He always told his family how much he loved his co-workers. He will be dearly missed by everyone.
In lieu of flowers, the family requests donations be made to the Crohn’s & Colitis Foundation, Southwest Phoenix Chapter, 4647 N. 32nd Street, Phoenix, AZ 85018, or online at https://www.crohnscolitisfoundation.org/
Memorial Service will be held Monday, October 28, 2019 at 2:00 PM at Whitney & Murphy Funeral Home, 4800 E. Indian School Road, Phoenix.

Offer Condolence for the family of EVANS, BRETT F