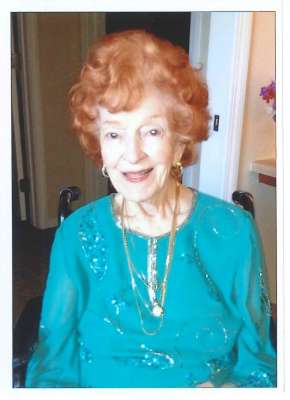 Maxine Evans, 101, of Phoenix, passed away June 15, 2015. She was born Maxine Hart on April 10, 1914 in Indianapolis, Indiana. She was a self-taught musician, who played piano and sang with several bands, most notably Hal Kemp’s band, in the 1930’s. She was a long time member of the DAR and is descended from numerous patriots of the American Revolution. She married the love of her life, Bill Evans, and together moved to Phoenix in 1947. She was a loving mother, grandmother and great grandmother and is survived by children Ron Evans, Patti Smith and Kathy Heiple (David), 9 grandchildren, and 5 great grandchildren. Visitation will be held from 2:00 – 4:00 PM with a prayer service at 3:00 PM, Saturday, June 20, 2015 at Whitney & Murphy Funeral Home, 4800 E. Indian School Road, Phoenix. In lieu of flowers, donations can be made to the Phoenix Rescue Mission, P.O. Box 6708, Phoenix, AZ 85005.

Offer Hugs From Home Condolence for the family of EVANS, MAXINE HELEN