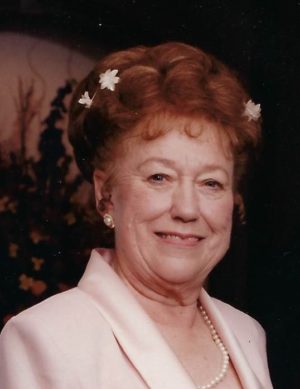 Wilma Dora Fairbanks was welcomed to her heavenly reward on Sept 13, 2017. Wilma lived a life centered in her faith, her family and her friends. She and her husband, Arthur, shared every aspect of their happy, gregarious lives and were the closest of friends. Wilma was born in Johnson, Nebraska on June 23, 1925, the 7th of 8 children of local community leaders, August and Mary Blinde. Her parents left a large farm to operate a hotel, a general store and a meat packing plant. From an early age, Wilma worked in the hotel restaurant. She played high school sports and sang in the chorus. She did so well academically, that she skipped a grade. Graduating high school at 16, she moved on to attend business school in the nearby city of Lincoln, Nebraska.
With the onset of World War II, Wilma became active in the United Service Organization (USO) in Lincoln, which was a major center of Air Corps activity and a stopping point of the many aircrews heading to overseas combat. One night she met Technical Sergeant Arthur Fairbanks. He danced with her and that night he told her he would marry her someday. When he returned after flying 35 combat missions over Europe, they did just that. She then moved from Nebraska to Phoenix and they were married on May 25, 1945 in St Mary’s Church in downtown Phoenix. Together they had nine children. Wilma has always been very active in her church, particularly in the Sodality. As Art became a leader in the Fraternal Order of Police, Wilma also served in the FOP Auxiliary and was elected to local and statewide office. They both participated in the National FOP organization. Arthur retired from the Phoenix Police Department in 1968 and then eventually became Police Chief in the Yuma and Tempe Police Departments. She became heavily involved in those communities, and was especially active in Mount Carmel Catholic Church in Tempe. She always delighted in family events. They had a large and close circle of friends who were a part of their daily life. She was preceded in death by daughter Beth and son Tom. Wilma is survived by her husband of 72 years, Arthur F. Fairbanks; daughters Mary (Kevin) McGeever, Barbara (Stephen) Ryan and Theresa Anderson; sons Frank (Ruth), Damian, Tim (Julie), and Dan (Terese) Fairbanks; 19 grandchildren and 26 great grandchildren. Visitation will be held from 6:00 PM – 8:00 PM with a Rosary at 7:00 PM on Friday, September 22, at Whitney & Murphy Funeral Home, 4800 E. Indian School Rd., Phoenix. The Funeral Mass will be celebrated at 1:00 PM on Saturday, September 23, at Corpus Christi Catholic Church, 3550 E. Knox Rd., Phoenix. Interment will be at Queen of Heaven Catholic Cemetery, 1562 E. Baseline Road, Phoenix. Wilma will be deeply and sincerely missed.

Offer Hugs From Home Condolence for the family of FAIRBANKS, WILMA DORA