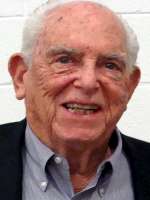 Charles Wilson Farrell, 86, died 16 October 2013 in Issaquah, Washington following a short illness.  He was born on 9 January 1927 in San Antonio, Texas, the son of Charles Richard Farrell and Rose Grace Tuttle. Charlie was an outgoing, cheerful,  hardworking businessman and loving father and husband. The keystone of his life was his Catholic faith. Charlie graduated from grade school in San Antonio and high school in Hammond, Indiana. He served in the US Navy from 1945-1946. He graduated from St. Joseph’s College in Rensselaer, Indiana and received his MBA from Loyola University in Chicago. He was a member of Phi Delta Theta. He taught business courses both at St. Joseph’s College and at Loyola. He met his wife, Loretta Leinen, at the Newman Center at the University of Chicago. They married on 19 August 1950 in Chicago.  He joined General Motors in personnel management in 1952 and during his career they lived in Flint, Livonia, Birmingham and Ann Arbor, Michigan, and Rye, New York. He retired from GM in 1982 and they moved to San Antonio, Texas where he started Aussie Pools, a business he ran for many years. They moved to Phoenix in 1992, where his wife Loretta died in March 2010 after 59 years of marriage. Charles married Marion Smith of Phoenix on 22 September 2012. She survives him. He is also survived by his nine children: Joan Byrne of Seattle; Sheila Volweider of Haven, Kansas; David Farrell of Phoenix; Maureen McCarthy of Phoenix; Charles E. Farrell of Lake Arrowhead, California; Marianne Farrell of Phoenix; Loretta Hill of Chandler, AZ; John Farrell of Seattle; and Janet Monahan of Walnut Creek, California; and 3 step children: Mark and Martha Smith and Mary Elliott. He is also survived by his sons-in-law: Mark Byrne, Rick Volweider, Tom McCarthy, Jonathan Hill and Bobby Monahan and his sister, Geraldine Sumrall of Plainfield, Illinois. He leaves behind 20 grandchildren: Laura Byrne Barnes, Patrick, Emily and David Byrne; Amy and Sara Volweider; Brian, Molly, Tom, John and Eileen McCarthy; John and Claire Norbut; Michael Farrell and Blake Duncan; and Briana, Liam, Colin, Charlotte and Adam Farrell.  He also is survived by five great-grandchildren: Elizabeth and Susannah Barnes, and Theodore, Alexander and Xavier Byrne. Charles was a member of Right to Life and he participated in the first march, was a member of the Knights of Columbus, and was a lector at many Catholic churches all of his adult years. He also was privileged to go to Washington, DC to honor the veterans of World War II. Visitation and Rosary will be held on Thursday, October 24, 2013 at 7 p.m. at Whitney & Murphy Funeral Home, 4800 East Indian School Road, Phoenix. Funeral Mass will be held on Friday, October 25, 2013 at 10:30 a.m. at St. Joan of Arc Catholic Church, 3801 E. Greenway Rd., Phoenix. Charles will be buried in the National Memorial Cemetery of Arizona. Donations in his memory can be made to: Arizona Right to Life or the Alzheimers Association. “I have fought a good fight, I have finished my course, I have kept the faith.” (2 Timothy 4:7)

Offer Hugs From Home Condolence for the family of FARRELL, CHARLES W.