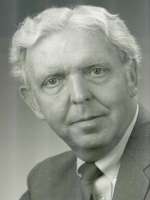 Chuck died April 21, 2013 in Scottsdale after a brief illness.  He was 82.  Born in Sharon, PA, he had big dreams he never acted upon until he married his pre-school sweetheart, Catherine, (yes, they’d known each other that long).  Within three years they had three children under the age of two.  (It’s possible; do the math.)  He had to get a real job.  Chuck joined Armour-Dial Corp. and he and Catherine began their great adventure, moving the family 10 times in 20 years.  The Ferry family ended dinner each night with logic problems, tall tales and ceaseless ribbing.  Chuck graduated from John Carroll University and served as an Army officer in Korea.  Although he was successful in business, retiring as a Sr. V.P. with Dial, he counted his greatest success as having a life-long love affair with Catherine and raising three kids in a joyous home. He was a devout Catholic and math savant but a failure at foreign languages.  He travelled the world and enjoyed gourmet meals but much preferred peanut butter on everything from hamburgers to bologna sandwiches.  He had a wicked wit and was a gifted story-teller but couldn’t remember jokes.  He had only one regret in life- – he couldn’t sing.  He lived his life with joy and service to the Lord.  His last words were, “It’s been a great ride.”  Chuck was a predeceased by Catherine in 2005.  He is survived by his forever grateful children: Kate Coleman (Jay) of Scottsdale; Charles II (Jude) of Steep Falls, Maine; and Mark of Phoenix.  He is also survived by four granddaughters who will smile forever at the memory of their Papa and Grampy.  Funeral Mass is Friday, April 26 at 10 a.m. at St. Maria Goretti Church, Scottsdale.  In lieu of flowers Chuck would prefer donations sent to the American Cancer Society.

Offer Hugs From Home Condolence for the family of FERRY, CHARLES HUETHER