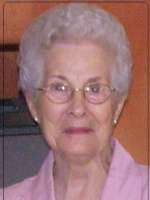 passed away on August 21, 2011 at the age of 88. She was born March 2, 1923 and was raised on a farm in Currie, Minnesota with her ten siblings. She graduated from Tracy High School in 1941 and worked in a defense plant in California until her marriage to Loren Fetter on April 29, 1944. She and Loren were active in Tracy community groups until their move to Scottsdale, Arizona in 1963. Virginia retired from the Arizona Air National Guard in 1985. She is survived by three children, Jacqueline (Gary) Ruppert of Currie, Minnesota, Joey (William) Ridenour of Paradise Valley, Arizona and Steven (Sheree) Fetter of Gilbert, Arizona; sister, Betty Kass and brother, Donald LeClaire; 12 grandchildren and 28 great grandchildren.. She was preceded in death by her husband, Loren Fetter, her parents, Henry Alfred and Elizabeth LeClaire and brothers and sisters; Odell Myhro, Henry LeClaire, Lucretia Anderson, Dwaine LeClaire, Rosemarie Ruppert Hansen, Vernon LeClaire and James LeClaire. Memorial Mass will be held at 10am, Thursday, August 25th, at St. Theresa Catholic Church, 5045 E. Thomas Road, Phoenix. In lieu of flowers, donations may be made to The Arizona Cancer Center, University of Arizona Foundation/Arizona Cancer Center, 1515 N. Campbell Avenue, Tucson, Arizona 85124.

Offer Hugs From Home Condolence for the family of FETTER, VIRGINIA P