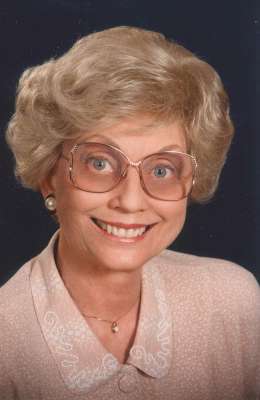 86, passed away peacefully at Hospice of the Valley Ryan House in Phoenix, AZ on April 29, 2016. Gerri is preceded in death by her husband Robert Gordon (Bob) Fiedler, sister, Judy Windes, second husband, Leonard Vanell, brother John Benscoe and her parents Mathias Oliver Benscoe and Gladys Helen Benscoe (Fritts). She is lovingly remembered by her daughter, Mitzi Tadin and son-in-law, Jim Tadin of Phoenix, AZ; Heidi Fiedler of Cary, NC; and son Keith Fiedler and daughter-in-law, Janelle Fiedler of Bend, OR. Gerri is survived by 4 grandchildren, Kelsey Tadin Maurer, of San Diego, CA; Allison Mitkowski, of Cary, NC; Matthew Tadin of Peoria, AZ; Madison Fiedler of Bend, OR; and great-grandson, Colton Mitkowski, of Cary, NC. In addition, she is survived by her sister, Shirley Thompson of Tucson, AZ. Gerri was born in Florence, AZ, February 21, 1930. She graduated from Tempe High School in 1946 where she was active in band and theater. Gerri went on to earn a Bachelor’s Degree from Arizona State University in 1950. She married Robert Fiedler in September of 1950 and both secured teaching positions in Superior, AZ where they resided for 16 years. Gerri taught first grade until the birth of their first child, after which she stayed home to raise a family until the death of her husband in 1970. Gerri was a dedicated wife and mother, but also enjoyed putting her writing talents to work on free-lance stories and articles for local and state-wide publications, including the Arizona Magazine, which at the time was published in the Sunday Arizona Republic Newspaper. At age 40, following the sudden death of her first husband, she once again attended Arizona State University and pursued an education in Journalism. She soon returned to teaching, this time in the Scottsdale School District. Gerri quickly found a home at Coronado High School where she taught English and Journalism, along with advising both the yearbook and newspaper, from the mid-70s to the mid-80s. She was a beloved teacher and advisor and one year turned the tables by insisting that her students take her on a field trip. They chose to take her to a “Rush” concert, giving her the true rock concert experience. After beginning her career as a first grade teacher and later moving to the high school level, her last career stop was teaching college at Glendale Community College in Glendale, AZ. She taught Journalism, Photography and took on the demanding role of newspaper advisor at the “Voice”, the college campus newspaper. She truly enjoyed the experience of mentoring adults, both young and old and encouraging them in their pursuit of a journalism career. She believed in the boundless potential in all of her students and helped them to believe in themselves. After retirement she enjoyed spending time with her children, grandchildren and the dozens of friends she made as a life-long Arizona resident. She loved square dancing and remarked how it was impossible to square dance without smiling. Gerri was famous in square-dancing circles for her beautiful and colorful outfits with ruffled skirts, pouffed out with layers and layers of netting. She adored the challenge of tennis, especially doubles, and was still playing actively into her early 70s. She embraced the joy of singing throughout her life and participated in Methodist Church choirs in Tempe, Glendale and later at Cross in the Desert United Methodist Church in Phoenix.

A Memorial Service, celebrating her life, will be held on Saturday, May 21, 2016 at 11:00 a.m. at Cross in the Desert United Methodist Church, 12835 N. 32nd Street, Phoenix, AZ 85032. A reception will follow at the same location. Everyone is welcome. Memorial donations may be made to Glendale Community College, c/o Gerri Fiedler Journalism Scholarship Fund, 6000 W. Olive Ave., Glendale, AZ 85032.

Offer Hugs From Home Condolence for the family of FIEDLER, GERRI B.