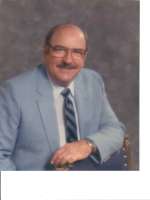 83, of Phoenix, Arizona, passed away on December 4, 2010 at Gardner Home Hospice of the Valley following a long illness. He was surrounded by family. Born on March 28, 1928, the son of George and Laura (Willoughby) Field, he was a lifelong resident of Phoenix, Arizona. Gene attended St Mary’s High School in Phoenix and graduated in 1947. He married on August 2, 1948 to Jeri (Langford) Field, who preceded him in death on November 18, 1978. “Gene” was employed by the Arizona Department of Transportation for 33 years, starting his career as a surveyor and ending as drafting supervisor. He is survived by 3 of his siblings: Elizabeth Field, Dorothy Herold, and Robert Field; his 9 children: Jeanette Fairfield, Laura Nunnelley, Stan Field, Frank Field, Thom Field, Jim Field, Chad Field, Sandra Hobson, and David Field and their spouses; his 18 grandchildren and 14 great-grandchildren. He was preceded in death by his siblings: Frank Field, George Field, Jack Field, Laura Alme, and Peggy Hyland. Visitation will be held Wednesday, December 8, 2010 at 9:00 am, Rosary at 10:30, followed by a Funeral Mass at 11:00 am at Whitney & Murphy Funeral Home located at 4800 E. Indian School Rd. Phoenix, AZ 85018. Interment will follow at St. Francis Cemetery. In lieu of flowers please give donations to Hospice of the Valley, 1510 E. Flower Street, Phoenix, AZ 85014

Offer Hugs From Home Condolence for the family of FIELD, EUGENE S