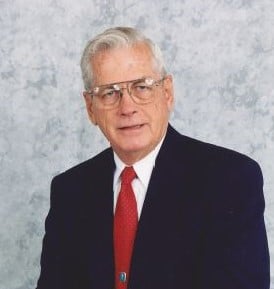 Daniel Lawrence Finch, born June 4, 1927 passed away peacefully with Family by his side on June 16, 2020 at Eckstein Center-Hospice of The Valley in Scottsdale.
Dan was born in Flushing, Long Island, New York. He attended Severn School at Severna Park, Maryland. After graduation he entered the Navy where he served aboard the USS Enterprise for 2 years. He moved to Arizona in 1946 with his family and attended Judson School in Paradise Valley. He attended The University of Arizona, where he met his wife of 67 years, Janet. He was a member Of Phi Delta Theta, Alpha Zeta Honorary and she is a Kappa Alpha Theta and there are more than a few funny stories about their times at the U of A and the great lifelong friends they made there. Upon Graduation, they married and moved to Phoenix settling into a home in the desert, riding horses and raising turkeys, and having 2 daughters. He also worked at the family lumber yard on Central before becoming a Custom home builder and commercial builder. In 1957 he built a home on the hill in Paradise Valley for Barry Goldwater and helped him campaign by flying all over the State to events. Dan had his pilots
license since College and enjoyed flying to Mexico, Florida and to the Cabin in Greer, AZ. Greer was a very special place for Dan and Janet.
They built a “Lodge”, which was enjoyed by family and friends for many years. It is a 2 story work of art! Dan was an accomplished sailor beginning as a young boy, sailing the “Great Circle” around the waters near Great Neck. He also sailed a “Hobie Cat” in regattas at Lake Pleasant and in Mexico with his daughters. One of the favorite family adventures was renting a “Bare Boat” and sailing thru the reefs of the Virgin Islands. When he was not Building homes, or flying or sailing or in Greer he volunteered for the Boys Club of Phoenix as President, Chairman of Harrington Arthritis Research, President of the 100 Club, President and District Governor of the Exchange Club, President of St. Luke’s Trusteeship Board, President of the Arizona National Livestock Show. Dan was very involved with All Saints Episcopal Church and Christ Church of the Ascension. He was a member of The Valley Field Riding and Polo Club and the Verde Vaqueros. Dan loved going on the Verde Vaqueros trips with his horse J.R. He made many friends and treasured them all. He is survived by his wife Janet, daughters Jenny Buckley & Dana Hayes (Lincoln), grandchildren, Stephanie (Jim Frederich), Allie (Nick Kosik), Sara (Ollie Kucharski), Brynn and Blaire and great grandchildren, Grant, Emmie and Blake. A loving Husband, Father, Grandfather and Great-Grand Father. Full of wisdom and love, Dan taught us about life and history and to never be afraid to go after what you want. We will treasure the memories and he will be greatly missed. The family will be planning a Celebration of Life in the future when we can be all together. If you would like to make a donation you may send it to the Boys Club of
Metro Phoenix, Christ Church of the Ascension, All Saints Episcopal Church or The 100 Club. HAPPY FATHERS DAY DAD/POPPIN! WE LOVE YOU.

Offer Hugs From Home Condolence for the family of FINCH, DANIEL LAWRENCE