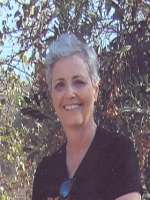 Loving wife. Loving mother. Born Feb. 10, 1953 at St. Joe’s Hospital to Lonie Gale Garland and Lillian Isola Gordon. Kathy lived her life in the Valley of the Sun moving frequently in her childhood. She graduated from Paradise Valley High School. After work as a bank teller, Kathy met Larry Fink, who wore a very particular shirt that day, and whom she considered to be her split-apart-soul mate, and thusly loved. They married on Dec. 15, 1972.
Larry and Kathy gave birth to two sons, Lonie and Christopher. Chris served as a U.S. Marine in the Iraq War, Lonie in music and I.T. While the kids grew up, Kathy managed to raise them while occupied as a waitress and studying for a Med Tech degree at Phoenix College. Kathy’s eventual work led her to the assistance of couples who found it difficult to conceive. Many happy families have been enriched in part through Kathy’s work. Later in life, Larry and Kathy enjoyed a number of cruises together, traveling to Alaska, Mexico, and the Caribbean. Their travels became often talked about around the dinner table. Her favorite destinations were England and Germany. Kathy was diagnosed with breast cancer in July of 2008. She lived with and fought cancer three times, never being defined by the disease that weakened her, until she passed away in her sleep at 5:15am on June 8, 2011.
Kathy is survived by her loving husband, two children, her mother and her granddaughter Katelyn. We have set up a fund in lieu of flowers. Please donate to: Katelyn Fink Education Fund c/o Star Business Management, 5777 W. Century Blvd. Suite 1600, LA, CA 90045. A Funeral Service in honor of Kathy will be held at 11:00AM Monday, June 13th, 2011 at Whitney & Murphy Funeral Home, 4800 E. Indian School Rd., Phoenix, AZ 85018. Love.

Offer Hugs From Home Condolence for the family of FINK, KATHARINE A.