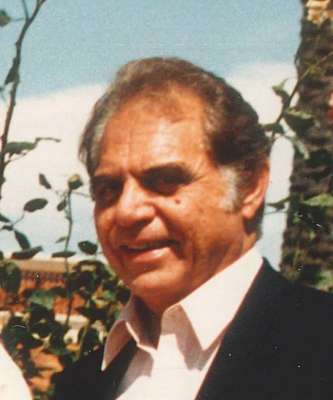 Passed away peacefully at his home on Sept. 9, 2016. Louis was born in Phoenix and attended St. Mary’s Grammar and St. Mary’s Catholic High School. He graduated from Phoenix College. He was a member of the Henry Firpo Family Poultry Business. Louis was in the U.S. Air Force and was stationed at Luke Air Force Base. He was an avid sports fan, attending all ASU games and ice hockey. He was a hunter and fisherman. Louis was never without his beloved dogs and was a supporter of the Arizona Humane Society. Louis was named after his uncle, the prize fighter, Luis Firpo. Luis was known as the wild bull of the Pampas who was from Buenos Aires, Argentina. Louis was preceded in death by his wife Josie, his father Henry, Mother Angie, Brothers Steve, Adolph and Gene and his sister Eleanor. He is survived by his sister Jeannette Firpo – Spicer & many Nieces and Nephews. Many heartfelt thanks to his three caregivers, Aura, Gloria and Pat. Funeral Mass will be celebrated Friday, Sept. 16th at 10:00 A.M. at St. Mary’s Basilica, 231 N. 3rd St, Phoenix. Interment will follow at St. Francis Catholic Cemetery, 2033 N. 48th St, Phoenix.

Offer Hugs From Home Condolence for the family of FIRPO, LOUIS HENRY