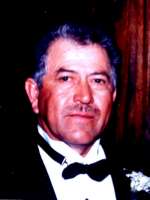 With profound sadness, Alex Sr., a child of God, was called home on May 15, 2013, after complications from surgeries. Alex was born February 26, 1943 in Phoenix, and was a lifelong resident. Upon graduating from Phoenix Union High School, he married his sweetheart, Amelia and began a long career in the construction trades, including sheetmetal, tarazzo and concrete.  His free time was spent traveling, fishing and enjoying the loving family to which he was devoted to.  Alex is survived by wife Amelia (née Orosco), son Alex Jr., and daughter-in-law Kit brothers Ernesto, George and Richard, his nieces and nephews Dodie and Jose Estrada, Tony and Teresa Barraza, Matt Barraza, Sandy Orosco and Elias Orosco, Bobby and Elizabeth Flores, Randy and Ernesto Jr. Flores as well as numerous others who were loved as if they were his own children.

Offer Hugs From Home Condolence for the family of FLORES, ALEX G., SR.