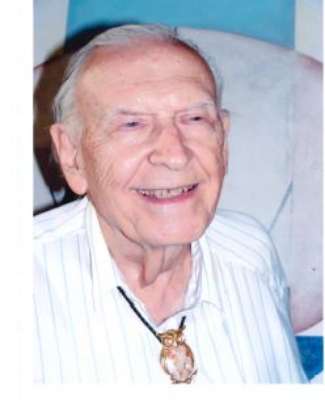 87, of Phoenix, passed away Friday, January 24, 2014 surrounded by long term friends. He was preceded in death by his beloved parents, Marie and Theodore. He was born in Chicago, where he attended Weber High School and learn to play the piano.  In 1947, he earned a Bachelor of Science in Radio Engineering from Chicago Technology College.  In 1951, obtaining another BS in Electrical Engineering from Illinois Institute of Technology.  He had a fruitful career with Western Electric and Motorola.  In 1957, he moved to Phoenix with his parents and continued his career with Motorola, eventually retiring from Honeywell. During his career, he was the intellectual mind behind 3 different patents.  He had an unparalleled thirst for knowledge that only now has been quenched by our heavenly father. Over the years, he had many different hobbies which gave him much fulfillment, most noted, was his lifelong passion for Space, the final frontier.  He was an avid Amateur Radio Operator K7BDJ, where he contacted thousands of people around the world. He loved to play the organ, sing and danced a heck of a Polka.  In his later years, he enjoyed surfing the Internet, always keeping up on current events. He was kind, gentle and had a great smile.  He will be missed by all that had the pleasure of knowing him. A Rosary will be held at 9:30am, with a Funeral Mass at 10:00am Thursday, January 30, at St. Francis Xavier Catholic Church, 4715 N. Central Avenue, Phx. Interment will follow at St. Francis Catholic Cemetery.

Offer Hugs From Home Condolence for the family of FLOWERS, ALFRED