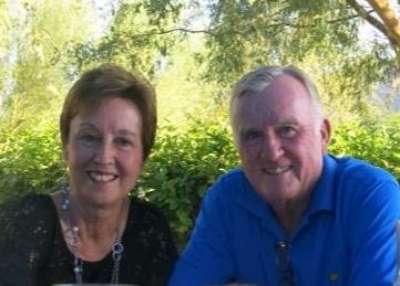 Michael Donald Frakes was born on November 6, 1942 in Webster City, Iowa.  On September 14, 1943, Cecilia Olivia Arriaga was born in Tucson, Arizona.  Mike moved to Tucson, Arizona in 1954, where they met at St. Peter and Paul Elementary School.  They dated thru grade school and high school, and on April 27, 1963, Mike and Cissy married in Tucson, where they had four boys.  They moved to Phoenix in 1977 to raise their family. Mike was an integral part of the banking and title industries in Phoenix and Scottsdale; committed to St. Theresa Parish and the Brophy Community (twice being President of the Dads’ Club); active in numerous Scottsdale organizations and charities such as the Boys Club of Scottsdale, the Scottsdale Head Honchos, and the Scottsdale Chamber of Commerce; as well as a champion of numerous golf tournaments at Arizona Country Club. Cissy dedicated her life to educating children.  She considered it her ministry.  She was an incredible mother of four, the neighborhood piano teacher, the parish and school music teacher, a principal of Catholic elementary schools, and the Assistant Superintendent of Catholic Education for the Diocese of Phoenix. The couple treasured family and life to the fullest extent until a tragic car accident on May 31st, 2015.  The accident resulted in Mike and Cissy passing away together.  They are survived by their four sons and their wives—Tim and Liz, Tony and Cindy, Ken and Stacy, and Brian and Christie; their nine grandchildren—Tim Jr., Mark, A.J., Michael, Lily, Mack, Kennedy, Cooper and Charlie.  They are also survived by Cissy’s sister, Adriana “Babe” Higuera, and her family, Ron and Andrea; Mike’s sisters’ families—Pat Verwiel and Joe Verwiel and Kathy and Tom Neukom—and their children; and his late brother Bob’s family, Anne Frakes and their children, Denise, Dianne and Duane. They were great parents and wonderfully loving grandparents.  They touched many lives with their unconditional love, and their impact can be felt throughout many families.  Most importantly, they are enduring examples of a committed marriage, not only to each other, but to their family and God.  They will be dearly missed. The Visitation will take place from 5:00 – 6:00 PM with a Scripture Service at 6:00 PM on Friday, June 5th, 2015 at St. Theresa Catholic Church, 5045 E. Thomas Road, Phoenix, AZ. Their Funeral Mass will be held on Saturday, June 6th, 2015 at 10:00 AM at St. Francis Xavier Catholic Church, 4715 N. Central Avenue, Phoenix, AZ. In lieu of flowers, please make a donation in their memory to either Brophy College Preparatory’ s Loyola Academy (contact Brophy’s Office of Faith and Justice at (602) 264-5291 ext. 6519, ofj@brophyprep.org) or The Catholic Community Foundation (www.ccfphx.org).  Arrangements entrusted to Whitney & Murphy Funeral Home.

Offer Hugs From Home Condolence for the family of FRAKES, MICHAEL D. & CECILIA A.