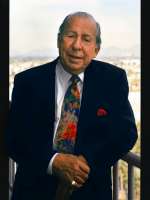 Frank E. Russell helped build Central Newspapers, Inc. (CNI) into one of the nation’s most successful newspaper companies and launched the Nina Mason Pulliam Charitable Trust as one of the largest philanthropic foundations in Arizona and Indiana.

John Zidich, CEO and publisher of The Arizona Republic, praised Russell’s business acumen and passion for the community, adding that Russell earned a stellar reputation in the media industry and “has left an indelible mark with impact throughout Arizona.”

Russell’s background as a lawyer and certiﬁed public accountant were invaluable assets to the Pulliam family and CNI, Zidich said. “The Frank Russell Chair in the Business of Journalism at ASU’s Walter Cronkite School speaks volumes about his many contributions to the industry and community.”

Russell shared a business relationship and friendship with Eugene and Nina Pulliam, founders of CNI, for almost 40 years. He began his newspaper career in 1959 working for them as the business manager at the Indianapolis newspapers, a position he held until 1977 when he was named vice president

and general manager of CNI. In 1979 he was named president.

“Frank was a man of the highest integrity. He was, above all, a great listener. And, after digesting all information, would act, invariably doing the right thing. His people skills were beyond reproach, giving many, including me, the chance to succeed. As CEO of Central Newspapers, he led the company to new heights,” said Louis A. ‘Chip’ Weil III, who Russell recruited in 1991 to become publisher and CEO of Phoenix Newspapers Inc. Weil was named president and CEO of CNI in 1996 upon Russell’s retirement.

“Frank Russell was my mentor and wonderful friend. I will miss him as will all those who dealt with him both here in the Valley and in Indianapolis. Frank had a long, fruitful and productive life and he should be an example to us all,” Weil added. Upon Nina Mason Pulliam’s death in 1997, Russell was named chairman and founding Trustee of the Nina Mason Pulliam Charitable Trust. Russell oversaw the creation of one of the most signiﬁcant charitable foundations in Arizona and Indiana. “Frank was Nina’s dear friend and close business associate, and it fell to him to organize the Trust after her death,” said Carol Schilling, Nina Pulliam’s niece, who Russell appointed as a founding trustee to the Nina Mason Pulliam Charitable Trust in 1997. Schilling became chair last year following Russell’s retirement.

“I always found Frank to be not only the smartest man in the room but the kindest and most considerate. He was astute, succinct and insightful. There will never be anyone like him and

we shall miss him,” Schilling added.

The Trust also created a nationally acclaimed scholarship program, the Nina Mason Pulliam Legacy Scholars, for nontraditional scholarship recipients that brought the dream of a college education to 434 individuals in Arizona and Indiana.

Judy Mohraz, president and CEO of the Virginia G. Piper Charitable Trust, called the Pulliam Trust “one of the great jewels of this community and in Indiana. We are all indebted to the Trust Frank Russell built.”

Marlene Klotz Collins, who serves on The Salvation Army Phoenix Advisory Board, said Russell’s legacy will be “felt for generations to come.

“It was the Nina Mason Pulliam Charitable Trust’s early support of The Salvation Army’s Ray & Joan Kroc Community Center capital campaign that helped us launch the effort and attract other donors who recognized if the Trust was on board, this was a campaign to support. The Trust helped us bring the dream of a Kroc Center to Phoenix and the support continues today,” Klotz Collins explained.

“Dad has been a great father for my sisters, brother and me in addition to all his success in the business world. He’s always been there for us regardless of his professional commitments,” said son Richard “Rick” Russell. “His family leadership provided us with standards and examples that have shaped every aspect of our lives.”

“Frank Russell was a visionary. He helped develop Central Newspapers into one of the most lucrative publishing companies in the country. He led a Trust that proved to be a model for other Arizona philanthropies,” said Richard Mallery, family friend and senior partner at Snell & Wilmer.

Mallery stated of all his memories, his favorite was watching Frank and “his beloved wife Nancy dance at The Arizona Biltmore. They were fantastic on the dance ﬂoor, moving together in perfect sync which, I believe, symbolized their graceful partnership in life.

“Their love and respect for each other is a model for us all; how to live, how to love, how to give back, making our community a better place for us all to call home,” Mallery said.

Russell was born December 6, 1920, in Kokomo, Indiana, the son of a Standard Oil of Indiana employee whose job kept him moving throughout the state, including Delphi, Mishawaka and Evansville, where he attended both high school and college.

He enrolled in the Indiana University School of Law, graduating with honors in 1951.

He served as a director of the Newspaper Advertising Bureau, Inc. and governor of Newspaper Association of America.

He also was a life trustee of the University of Evansville and served as director of the Eiteljorg Museum of American Indians and Western Art, Methodist Hospital, Winona Memorial Foundation of Indianapolis, Walther Cancer Institute and president of the Institute of Newspaper Controllers and Finance Ofﬁcers, treasurer of the Meridian Street United Methodist Church, director and president of the YMCA of Greater Indianapolis and a member and past vice chairman of the Advisory Board of the Salvation Army. He served as a director for the Arizona community Foundation and The Phoenix Zoo.

He was a member of the Indianapolis, Indiana and American bar associations, the Indiana Association of Certiﬁed Public Accountants, American Institute of CPAs, IU Board of Visitors for School of Law, The Indiana Academy, Indianapolis Zoological Society Advisory Committee, Economic Club, Press

Frank Russell was recognized by the Arizona State University Walter Cronkite School of Journalism and Mass Communication for his years of leadership in Phoenix when it created the Frank E. Russell Chair in Business and Journalism. Marian University also honored Russell at its 6th Annual “Opportunities for Excellence” dinner for his signiﬁcant contributions to the state of Indiana. He also was presented with the Sagamore of the Wabash.

The visitation is Thursday, January 31 at Whitney & Murphy Funeral Home, 4800 East Indian School Road in Phoenix from 4 p.m. to 6 p.m.

A memorial service will be held Friday, February 1 at 1 p.m. at The Salvation Army Ray & Joan Kroc Community Center at 1375 East Broadway Road in Phoenix.

In lieu of ﬂowers, the family requests memorial contributions be made to Hospice of the Valley, 1510 East Flower Street, Phoenix, AZ 85014 or “The Russell Day Camp” for underserved youth at The Salvation Army Ray & Joan Kroc Community Center at 1375 East Broadway Road, Phoenix, AZ 85040.

The family wishes to express their appreciation to Hospice of the Valley’s wonderful staff who provided support to Frank and the family.

Offer Hugs From Home Condolence for the family of Frank E. Russell