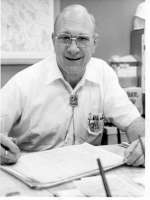 Franken, Robert Urban
88 of Phoenix, AZ passed away on Dec. 21, 2009, at the Life Care Center of Paradise Valley. He was a veteran of three wars – World War II, Korea, and Vietnam. Bob was born March 14, 1921, near Norborne, Mo., one of eleven children of Henry and Matilda Franken. All of his siblings preceded him in death. He lived on the family farm and graduated from Hardin High School, joining the U.S. Army Air Corps shortly before World War II. During the war he was an aircraft mechanic on Christmas Island before enrolling in flight school and earning his pilot’s wings. After the war he worked as a watchmaker for Liebermann’s Jewelry Store in Joliet, IL. In 1943, he married Edith Cuno, of Wilmington, IL, who preceded him in death in 1991. He was recalled to duty for the Korean War and was stationed in Okinawa as a B-29 pilot. He flew B-29s, B-36s and B-52s, among other aircraft, for the Air Force, and served as a safety officer, until he retired in 1969. During the Vietnam War he was based at Andersen AFB, Guam. His other assignments included Randolph Field, TX; Ellsworth AFB, SD; Mather AFB, CA; Travis AFB, CA; and Malmstrom AFB, MT. In an incident during the Cold War, his quick thinking saved the lives of an entire B-52 crew on a mission near the former Soviet Union. After he retired from the Air Force, he moved to Tempe and worked until 1979 as a safety specialist for the Arizona Department of Transportation. He was a Fourth Degree member of the Knights of Columbus. In 1992 he married Marvellyn “Ossie” Galvin. He was an avid sports fan, cheering for all of the Phoenix teams as well as the University of Notre Dame, and enjoyed spending time with his grandchildren. He is survived by his wife, a son, Robert E. Franken, and a grandson, Robert M. Franken, both of Granger, IN; seven stepchildren, 19 step-grandchildren and two step great-grandchildren. Visitation was held on Monday, December 28, 2009 from 9:00-10:00 am, at Whitney & Murphy Funeral Home, 4800 E. Indian School Road, Phoenix. Funeral Service followed at 11:00 am at St. Joan of Arc Catholic Church, 3801 E. Greenway Road, Phoenix. Mr. Franken will be buried at Arlington National Cemetery at a later date.

Offer Hugs From Home Condolence for the family of FRANKEN, ROBERT URBAN