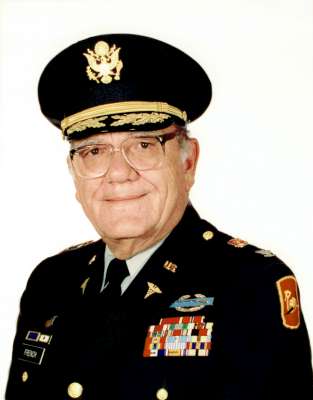 Alfred was born in Bisbee, AZ on May 27, 1926. Anyone who knew Alfred heard stories about the mining town that colored his youth. Alfred was always curious and devoured history. Alfred attended Bisbee High School, Wentworth Military Academy and Valley Forge Military Academy, graduating in 1944. Upon graduation, Alfred asked for immediate induction into the U.S. Army.

Alfred’s first enlistment was served in France, Belgium and Germany where he was a Private 1st Class and Corporal in the 79th Field Artillery Group. He was honorably discharged from WWII in July of 1946.

In June of 1950, Alfred was serving in the Army of Occupation in Japan when the Communist North Korean forces attacked South Korea. Under the command of Gen. Smith, his battalion was ordered to Pusan and then to Osan, becoming the first American ground forces to fight and delay the attacking North Koreans. This group of American soldiers is known as “Task Force Smith.” First Lieutenant Alfred R. French, Infantry, U.S. Army, a member of Headquarters Company, First Battalion, 21st Infantry Regiment, 24th Infantry Division was awarded the Bronze Star Medal for meritorious service in Korea during July through October, 1950. During the Korean War, Alfred participated in the UN Defensive, the UN Offensive, CCF Intervention, First UN Counteroffensive, and the CCF Spring Offensive.

Some of Alfred’s military distinctions include:

Alfred returned to Phoenix, AZ, utilized the G.I. Bill and received a B.S. from Arizona State University. Alfred graduated from Tulane Medical School with a specialty in Ophthalmology in1959 and joined his father, Harry French, M.D., in private practice. Alfred joined the Army National Guard in 1976 and served until 1993. Alfred was Chief of Ophthalmology at the V.A. Hospital from 1990 until his retirement in 1999.

Alfred is preceded in death by his wife of 44 years, Mary Jo French, his sister Till and his grandson Trenton. Alfred is survived by his sisters Adele (Jack) and Tuck, children: Rosina (Mike,) Harry (Sigrid,) Ned (Carri,) Cia, Lydia (Jim,) Laura, Alfred III, nine grandchildren and one great-grandson.

In lieu of flowers, we respectfully ask that donations be made to Hospice of the Valley, www.hov.org.