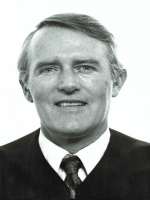 William Patrick French “Bill” passed away on August 26, 2013 in Phoenix, AZ after a courageous battle with lung cancer.  Bill was born on March 24, 1931 in Phoenix to Dr. Guy Clifford French and Grace Mary Brothers.  At age 7, after the untimely death of his father, Bill and his family moved to Murphysboro, Illinois where he completed elementary and high school. Bill was a leader at a young age, serving as Senior Class President, Captain of the football and basketball teams as well as Homecoming King. During his sophomore year he met his lifelong love, Peggy Van Meter. An outstanding athlete, Bill was named All State for football and received 18 Division 1 scholarship offers. He proudly chose to attend the University of Notre Dame to play for Coach Frank Leahy. After college, Bill and Peggy married and he was accepted to the Marine Corps Officer Candidate School in Quantico, VA, where he served and attained the rank of Captain. Bill’s first two children, Shawn (Jodie) and Mary (Gary Rylander) were born at Quantico. Bill served on active duty until 1956 and in the Marine Corps Reserves until his Honorable Discharge in 1967.  Bill entered the law school of St. Louis University in 1956 on an academic scholarship and served on the Law Review Editorial Board. While Bill was in law school, daughters Kathleen and Colleen (Bob Barlow) were born. Kathy, born with special needs, always held an exceptional place in Bill’s heart. Upon graduation from law school, Bill was selected to participate in the U.S. Attorney Generals’ Honors Graduate Program in the United States Department of Justice. He served on the Organized Crime Task Force and participated in the trial and conviction of union organizer Jimmy Hoffa. Bill was a Deputy Special Agent, tasked to enforce what was to become the 1964 Civil Rights Act in Mississippi. At the personal request of US Attorney General, Robert Kennedy, Bill served as part of Kennedy’s successful Senatorial campaign in 1964. In 1965, Bill moved his family to Phoenix to join the litigation team at Kramer, Roche, Burke, Streich & Cracchiolo, which became Streich, Lang, Weeks, Cardon & French. In 1966, daughter Bridget (Dan Peacock) was born. In 1978, Bill was appointed by the Governor to the Maricopa County Superior Court, where he served with distinction until 1983, when he elected to return to private law practice. In 1988, Bill was selected by the Arizona legislature to investigate and prosecute the impeachment of former Governor Evan Mecham. He then worked in private practice with several law firms until retiring in 2003. Bill was a devout Catholic, and active in St. Francis Xavier Church and School throughout the years. He served on the Phoenix Chamber of Commerce and Law Enforcement Task Force. He was appointed to the Arizona Racing Commission and served for a number of years. He and Peggy were lifelong advocates for the disabled, serving on the board for the Arizona Foundation for the Handicapped. A partial list of Bill’s accolades include:  1989 co-recipient of the Public Law Award from Center for Law in the Public Interest; commendation from the Speaker of the Arizona House of Representatives in 1988; 1999 Alumnus of the Year at St. Louis University Law School; 2010 Maricopa County Bar Assoc. Hall of Fame award; a three-time Murphysboro High School Athletic Hall of Fame inductee and in 2011 winner of the National Catholic Educational Association Distinguished Graduate Award from Saint Andrew School.  Bill lost his beloved wife Peggy in 2009 and has since spent his time volunteering for St. Vincent de Paul, and enjoying his family, grandchildren, great grandchildren and his dog Ginger. Bill is survived by his 5 children, 7 grandchildren (Katie, Meaghan, Jon, Nat, Patrick, Will and Maggie) and his 2 great-grandchildren (Arianna and William). Visitation will be held from 5-6 PM
on Thursday, September 5, 2013 at Brophy Chapel, 4701 N. Central Avenue, with Rosary to follow at 6 PM. A Requiem Mass will be celebrated Friday, September 6, at St. Francis Xavier Catholic Church at 6 PM. Military Honors prior to Mass. In lieu of flowers, donations may be made in Bill’s memory to the Arizona Foundation for the Handicapped, 3146 E Windsor Ave, Phx, AZ 85008.

Offer Hugs From Home Condolence for the family of FRENCH, WILLIAM PATRICK