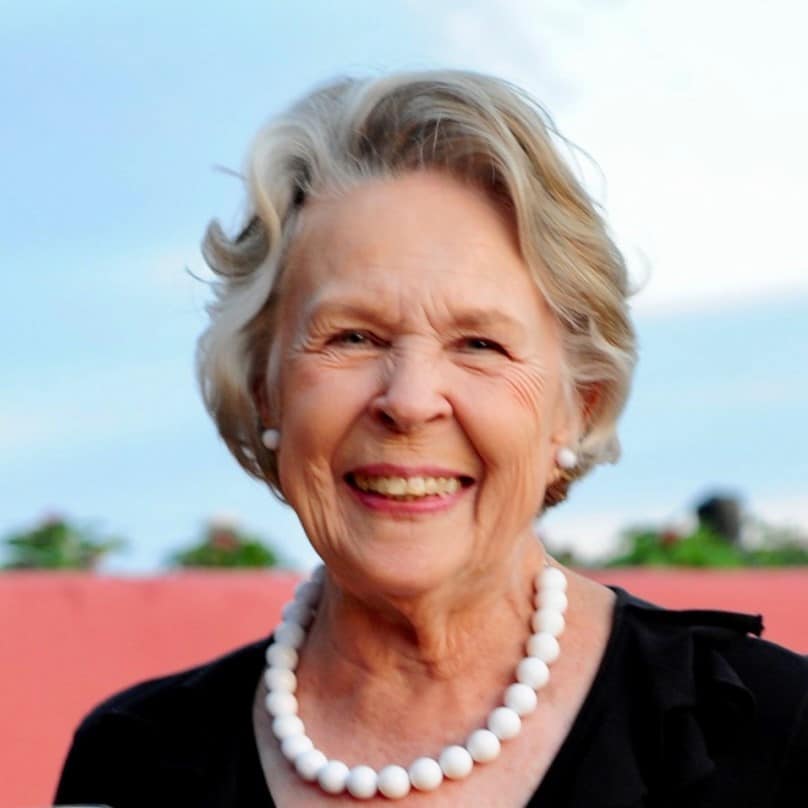 Alice lived nearly 88 years running at full throttle. Adventurous Alice was born in Englewood, NJ but thrived in the dynamic and developing Western setting that was Phoenix, AZ in the late-Fifties and Sixties. Here, she and her husband, Donald F. Froeb (1930-1997) a handsome fighter pilot, attorney and judge, enjoyed a marriage of 44 years and created a fulfilling family life with four children, contributed to civic & cultural leadership, and built long-lasting relationships with wonderful friends in the Valley of the Sun, even recruiting their own parents and other family members to join them in Arizona.
Widely acknowledged as possessing immense stores of energy which fueled her intellect and drive, Alice raised four happy and successful children, cared for aging parents, completed her BA from Sarah Lawrence in 1977 and helped lead key institutions in the Valley. Her contributions were appreciated on many boards and advisory councils, among them United Way, Salvation Army, St Luke’s Board of Visitors, Florence Crittenden, and Arizona Tomorrow. She enjoyed an active career in The Junior League of Phoenix including a term as President. Her broad background and deep interest in the arts earned her gubernatorial and mayoral appointments to the Arizona Commission on the Arts and Phoenix Arts Commission, and complemented directorships on the boards of cultural institutions such as the Phoenix Chamber Music Society, which she helped co-found, National Society of Arts and Letters, Arizonans for Cultural Development and the Phoenix Art Museum, where she served as Vice President of the Board of Trustees and President of the Art Museum League. Alice volunteered with many institutions in the Valley, including the Assistance League where she would provide lower-income children with the clothing they needed for school. Alice also served for seven years as a Hearing Officer with the Phoenix Civil Service Board and enjoyed many years as a Director of the Northern Trust of Arizona.
Alice was deeply loved by her friends for her generous spirit and creative energy. Her enthusiasm for life was contagious and the word commonly used to describe her was FUN. Highly competitive in tennis and bridge, she always wanted to play her best game. She embraced the challenges of adventure travel organized by her late husband, managing risk with contingency plans and ensuring a lifetime of enjoyable family memories.
Moving forward with tremendous zeal in her later years, Alice continued to contribute to various boards and commissions, direct her acumen and instincts into financial and real estate investments, provide support and guidance to her expanding family, and enjoy international travel. The family members inspired by her who miss her dearly include her four children and their spouses: Leslie Froeb (Scott Turner) and Peter Froeb, of Phoenix, Jim Froeb (Linle Jenkins Froeb ) of San Francisco, Deborah Froeb (Tim Gardner) of Denver, and grandchildren Colin, Derek and Adam Turner, Ben and Gus Gardner and Phoebe, Tabitha and Whitney Froeb. The memorial service will be held Saturday, June 19, 2021 at 10:00 a.m. at Valley Presbyterian Church, 6947 E. McDonald Drive, Paradise Valley, AZ  85253
Donations in her memory may be sent to Phoenix Chamber Music Society (www.phoenixchambermusicsociety.org) or Hospice of the Valley (www.hov.org)

Offer Hugs From Home Condolence for the family of FROEB, ALICE KEIR