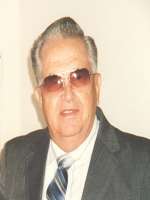 of Phoenix, departed this life to be with the Lord on February 8, 2010 at Maricopa Hospice Care Center. He was the son of Jacob and Louise Gall, born September 27, 1926 in Wood, SD. Art served four years in the US Army; nine months in Okinawa. He married Elsie Rudolph on 9-13-43 in Iowa City, IA. He worked at J. I. Case in Bettendorf, IA, and the Rock Island Arsenal until he moved to Phoenix. Art then went to Aero Research until his retirement. Elsie Lois passed away January 11, 1989 in Arizona. They had no children. He married Wynette Cherry in Phoenix. She died in 2001. He was further preceded in death by his parents, brothers; Albert, Jake, George, Richard and David, sisters; Clara, Dorothy, Ida, Lene and Elizabeth. Survivors include his four sisters; Helen Hodges of Gray, TN, Alice Vetter of Long Grove, IA, Roberta McCarroll of Davenport, IA and Anna Goering of Sheridan, IA ; 3 step-daughters; Becky Arecheralita, Lea Winchester, and Lynn Cherry, 8 grandchildren and 12 great grandchildren. Art loved to bowl and eat breakfast with his friends. He was a loving brother and a great person. Graveside Service will be held at 1:00 pm, Friday Feb 12, at Greenwood Memory Lawn Cemetery, 2300 W. Van Buren, Phoenix. Memorial donations may be made to the Phoenix Christian Assembly, 2030 N. 36th St, Phoenix, 85008 or Hospice of the Valley, 1510 E. Flower Street, Phoenix, 85014. Please sign guest book at www.whitneymurphyfuneralhome.com

Offer Hugs From Home Condolence for the family of GALL, ARTHUR PHILLIP