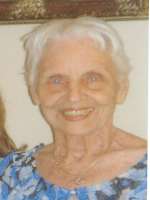 92 of Phoenix, Arizona passed away on October 25, 2010. Ellie was born on January 20, 1919, in Wayne, Nebraska and was raised in Iowa, along with her sister and four brothers by their parents Al and Mary Lantaff. Ellie attended business college and worked for the Federal Bureau of Investigation in Washington, DC for several years. She married the love of her life, Bill Gallagher, who returned from active duty in 1945 and packed Ellie and her young son, Mike off to California. Son Pat came along about five years later. Ellie spent twenty plus years of her life preparing pre-game meals and attending more youth, high school and college sporting events watching her boys than anybody ought to be exposed to. Her family and her Catholic faith richly filled her life. Since 1973 when Bill died, Ellie has lived in Phoenix being a wonderful mother, grandmother and great-grandmother. She is survived by her son Mike, daughter-in-law Barbara, son Pat, daughter-in-law Lynne, grandson Sean, his wife Roxann, great-granddaughter Lovey, granddaughter Ryanne Tezanos, her husband Jose, and great-granddaughter Riley. A Memorial Mass in honor of Ellie will be held at Brophy Chapel at 9:00 a.m. on Saturday, January 8, 2011. In lieu of flowers the family suggests memorials be made to Brophy College Preparatory. Ellie would love it if in her memory you would go out and enjoy a kid’s ball game.

Offer Hugs From Home Condolence for the family of GALLAGHER, ELEANOR FRANCES