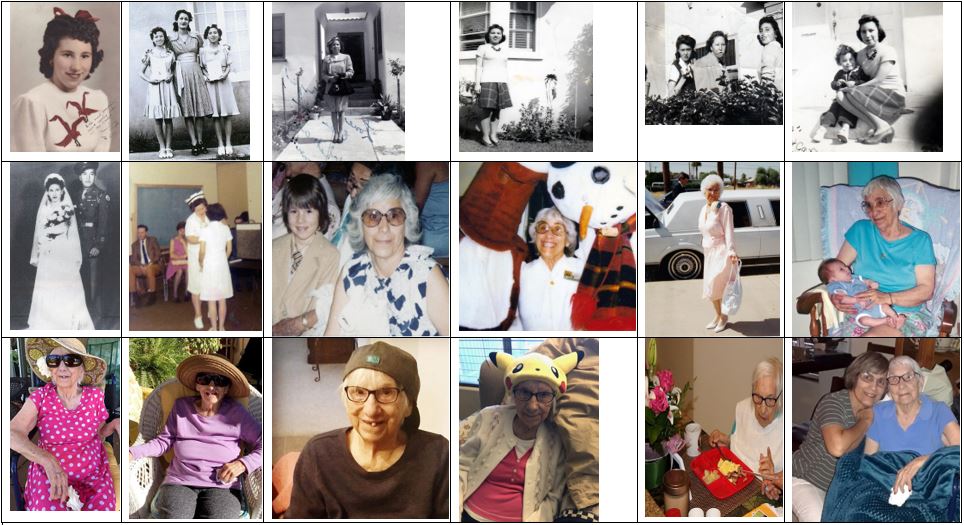 According to historical and genealogical records, it is thought that the New Mexico Sandoval line originated in the 16th century in the Spanish Kingdom of Aragon, probably in the Iberian village of Sandoval de la Reina.

In the late 1930’s, Aurora Sandoval sent Elda and her sisters to Los Angeles to join the Gomez branch of the family, where Elda’s older sisters worked for aircraft manufacturers in the defense industry. Elda enrolled in Manual Arts High School in Los Angeles, California, and after graduation, she worked as administrative assistant to one of the famous Pep Boys, Manny Rosenfeld.

During the war years, Elda and other young women enlisted in military support groups that wrote letters to military personnel serving the war effort during WW II. It was at this point in 1941 that Elda started writing to a US Army soldier named Climaco J. “Johnny” Gallegos. After repatriation to the United States following the end of WW II, Climaco travelled to Phoenix to ask Elda’s family for her hand in marriage.

Elda married Gallegos, son of Juan Nepomuceno Gallegos and Maria Felis Campos of Ojo Caliente, Taos, New Mexico, on October 8, 1944. The couple settled in San Diego, California, while her husband entered barber school paid for by the US Army.

After completion of his barber training and certification, Climaco and Elda settled in the Central Park District of Phoenix, Arizona. The couple started their family in the same neighborhood as her widowed mother Aurora Sandoval and their extended family.

It was in this neighborhood that the couple raised six children: three sons (John, Ruben, and Michael), and three daughters (Marie, Martha, and Margaret). For a substantial part of her life, Elda was a stay-at-home mother raising the six children.

Elda suffered many ups and downs due to her husband’s health issues resulting from what is known today was war-induced PTSD. Climaco was a skilled rifleman from his days on the Gallegos northern New Mexico farm. According to his youngest sibling, John Mauricio Gallegos, his brother Climaco never missed the mark with his 22-caliber rifle. Given this skill set, the US Army trained Climaco as a “sharpshooter” which, in today’s parlance, is a “sniper.”

It is said that a sniper remembers all. Elda’s husband Climaco was a gentle and kind person, and these terrible memories took both an emotional and physical toll. He was treated by the Veterans Administration healthcare System for many years for chronic healthcare issues, but it was the VA domiciliary at Ft. Whipple, Prescott, Arizona that he felt most at peace. Climaco stated to Elda that it was his final request that he be buried at the National Cemetery at Prescott, Arizona, and that she was to be buried with him upon her death.

Elda had not worked outside the home since the war years – she had always been a housewife and relied on her husband to provide a paycheck and take care of things and never held a job, drove a vehicle, or even balanced a checkbook. A few years before Climaco’s death in July 1974, she began to look for employment to help support her youngest children. She underwent training as a nurse’s aide, obtained a driver’s license, bought a car, and made a home for the children remaining at home. She went on to work at St. Luke’s Hospital in Phoenix for nearly 20 years

Elda always enjoyed young people, particularly her caregivers, in her later years. She would tell these young women of her life as a child and adolescent in Concho, Arizona and the daughter of two New Mexico pioneer parents.

Her chronic illnesses, including diabetes, took an advancing toll on Elda and she passed away at her daughter Margaret’s and son-in-law Richard’s Laveen home on December 16, 2019.

Offer Hugs From Home Condolence for the family of GALLEGOS, ELDA MAE SANDOVAL