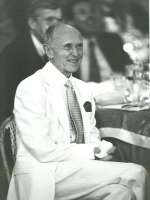 Longtime Phoenix resident Emil Paul Ganz, 85, died April 27th, 2012 at his home in Coronado, California. Bus was a caring father and brother, and an accomplished cattleman, musician and athlete; indeed a man for all seasons, excelling at every endeavor.

An entrepreneur at the age of 12, Bus was the founder and proprietor of the Verde Lane Drive-In for several years, selling cold drinks to the neighborhood before the family headed up to Prescott each summer. During high school summers, he worked as both a ‘grease monkey’ at a local service station, as well as a ranch hand. He told his father he wanted to be a cowboy and live on “Tennis Island”; two goals that he achieved with unqualified success in his lifetime.

He served in the US Army Air Forces until 1946. He attended Loyola University in 1947 for 2 years, then transferred to California Polytechnical State University (Cal Poly) in San Luis Obispo where he graduated in 1951 with a degree in Animal Husbandry. Upon graduation he worked for Dan Cameron and John Osborne in Brawley, CA, learning the cattle feeding business first-hand from his mentors.

In 1960 he joined forces with fellow aspiring cattle feeder, Jimmy Hughes, and the two purchased their first feed lot. This partnership gave birth to the Hughes & Ganz Cattle Co. which, over time, proved to be a highly successful cattle feeding operation, admired as an industry leader. Bus was known for integrity in the business, proud to have closed complex deals with only a handshake. Hughes & Ganz Cattle Co. was sold to Arizona-Colorado Land & Cattle Company in 1973 and Bus was named Executive Vice President. As an executive with his company he traveled the world during this period sought after by individuals and governments for his expertise in the industry.

Several years later, Bus retired from the cattle business, and moved full-time to his vacation home in Coronado. Retirement for Bus meant racing his 35 foot sailboat, “BeBop”, at numerous races in San Diego with impressive results; taking courses at the Berklee College of Music in Boston and becoming a proficient jazz pianist, ultimately performing jazz concerts before an audience; winning 1st and 2nd place awards from the Coronadl Floral Association for his gardening abilities for 15 consecutive years; running seven miles a day, around Coronado, through his 84th birthday; and playing the game he loved as well, tennis, on the island of Coronado.

A cattleman to the end, in 1995, Bus had an opportunity to partner with friend and collegue, Bill Sawyer, forming the Sawyer and Ganz Cattle Company in Maricopa, until present time. Bux was a member of the Phoenix Thunderbirds, Arizona Cattle Growers Association and several other trade groups. He is remembered by those who loved him for his tremendous focus, compassion, grit, generosity, excellence, loyalty and always wise counsel. Bus is survived by his children Margaret, Charlie (Betsy) and Bill Ganz (Billie Jo), grandchildren Wesley and Grace Ganz, sisters Sylvia Ganz Houle and Joan Ganz Cooney, nieces Laurie Houle Gutierrez, Polly Houle and Maria Houle Soldatos, and longtime companion Judith Schille. Funeral Service will be held at 10:00am, Friday, June 1st at St. Theresa Catholic Church, 5001 E. Thomas Road, Phoenix, AZ 85018. In lieu of flowers, donations may be made to Circle The City, 220 S. 12th Avenue, Phoenix, AZ 85007, Healthcare for the Homeless: www.circlethecity.org

Offer Hugs From Home Condolence for the family of GANZ, EMIL PAUL