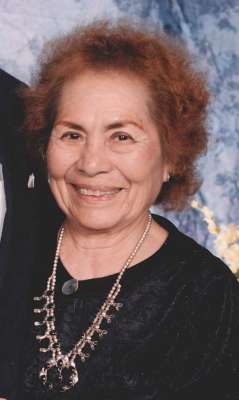 90, passed away on October 27, 2014. Antonia was born on All-Saints Day, November 1, 1923, in Jerome, Arizona to Jose and Guadalupe Garcia. After her father died in 1932, she and her mother and brother, Jose, moved to Prescott, Arizona where she attended school. She met and married Jose J. Garcia in Prescott. They had five children, Jose (Rosalia), Arthur (Rosalie, deceased), Frank (Lorie), Robert (Terri), and Barbara Ann (deceased). They moved to Ajo, Arizona in 1950 and lived there until Jose retired in 1981. Then they moved to Show Low, Arizona where Jose died in 2009. She has fifteen grandchildren, 30 great grandchildren and one great-great grandchild. Antonia was known by her children as a strong woman who lived her life her way. Visitation will be held at 9:00am, with a Funeral Service at 10:30am, Monday, November 3, 2014 at Whitney & Murphy Funeral Home, 4800 E. Indian School Road, Phoenix. Interment will follow at St. Francis Catholic Cemetery.

Offer Hugs From Home Condolence for the family of GARCIA, ANTONIA SANTOS