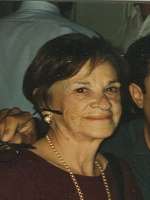 93 of Glendale, Arizona passed away on March 29, 2010. She was born in Zuni, New Mexico on June 3, 1916 to Donicio and Modesta Duran. She left the ranching town of St. Johns, AZ and moved to Phoenix in 1955 after the untimely death of her beloved husband, Conce, but continued in the cattle business until her recent passing. While widowed, she worked tirelessly raising 6 children of her own. Her pride and joy was her family and she dedicated her life to her children’s pursuits and ambitions. She enjoyed daily exercise, conversing with her sisters over the telephone and the Phoenix Suns. Most of all, she relished in the accomplishments of her children, grandchildren and great-grandchildren. Additionally, she was a devout Roman Catholic who rarely missed a night’s praying of the rosary. Whether you called her Mom, Barbara, Dolly, Nana or Nanita, you knew you meant the world to her. She is already gravely missed by those who loved her most. She is preceded in death by her son, Rueben. She is survived by her children – Connie, Anthony, Michael, Bobbie Ann and Chuck; sisters Della and Duty; brother, Frank; 13 grandchildren and 23 great-grandchildren. Visitation will be held on Tuesday, April 6, 2010 at St. Mary’s Basilica in downtown Phoenix from 9:00-9:30 am, Rosary and Funeral Mass to follow. She will be laid to rest at Holy Cross Cemetery located at 99th Avenue and Thomas Road. A post-burial celebration of her life will be held at the St. Mary’s Basilica hall at approximately 1:30 pm.

Offer Hugs From Home Condolence for the family of GARCIA, BARBARA