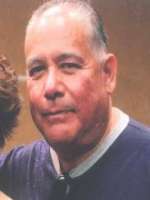 55, of Phoenix, AZ, passed away on the early morning of Tuesday, October 1, 2013.  Gilbert  is survived by his daughter Delberta Cordova, son Gilbert Garcia Jr. and eight grandchildren.  He also leaves behind his sisters; Christine Valdez, Juanita Fernandez, Marcie Maes, Genie Martinez and Sadie Ortiz all of Colorado Springs, CO.  Gilbert is preceded in death by his parents Paul and Larraine Garcia and brother  Jimmy Garcia.  He was born on January 22, 1958 in Colorado Springs, CO., where he grew up and lived before moving his family to Phoenix, AZ over 25 years ago.  He loved spending time with his grandchildren, going to the “Phoenix Park and Swap” and being with friends.  He will be dearly missed by all who knew and loved him.  Visitation will be held on Wednesday, October 9, 2013 from 6:00-9:00 P.M., with a Rosary at 7:00 P.M. at Whitney & Murphy Funeral Home, 4800 E. Indian School Rd., Phoenix.  Funeral Services will be on Thursday, October 10, 2013 at 10:00 A.M., at Whitney & Murphy Funeral Home.  Interment to follow at St. Francis Catholic Cemetery,  2033 N. 48th St., Phoenix.

Offer Hugs From Home Condolence for the family of GARCIA, GILBERT ANTHONY, SR.