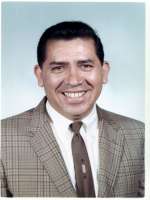 Veteran and beloved husband of Anita Garcia passed away on November 16th, 2010 at the age of 81 after a brief struggle with liver cancer. Gilberto was born in Mesa, AZ on April 11th, 1929 and spent his early years in Superior, AZ. He moved to Phoenix in 1937 and graduated from Phoenix Union High School in 1948 where he played football. After graduation he served in the U.S. Air Force as a Staff Sergeant and returned to Phoenix where he graduated from Arizona State University in 1956 with a degree in Business Administration. He returned to Northern Arizona University and received his Master’s Degree in Education in 1969. He eventually matriculated into teaching where he started with the Phoenix Elementary School District #1 and continued his career as a Title 1 Program Specialist for the Arizona Department of Education until his retirement in 1989. He had a strong desire to serve his community serving as the president of the City of Phoenix Parks and Recreation Board, president and a founding member of the Vesta Club, and was active with the local chapter of the Classroom Teachers Association. He was an avid sports fan with a true passion for ASU teams. He is survived by his wife Anita of 54 years, sons Gilbert (Julie) and Paul (LouAnne), daughters Denise (Jim), and Gena (Tim), sister Stella Aguirre (Eddie) and brother Manuel Moreno as well grandkids, Allison, P.J., Amanda, Katelyn, Tiara, T.J., John, Alec, Danielle, Brittany and Mike. His family loved him dearly and he will be missed tremendously. Go Devils!!! A Visitation will be held from 7:00 to10:00 PM on Sunday, November 21st at Whitney & Murphy Funeral Home, 4800 E. Indian School Road in Phoenix. Rosary prayer will begin at 7:30 pm. Funeral Service will be held at 10:00 AM Monday, November 22nd at Whitney & Murphy Funeral Home. Interment will follow at St. Francis Cemetery, 2033 N. 48th Street in Phoenix.

Offer Hugs From Home Condolence for the family of GARCIA, GILBERTO