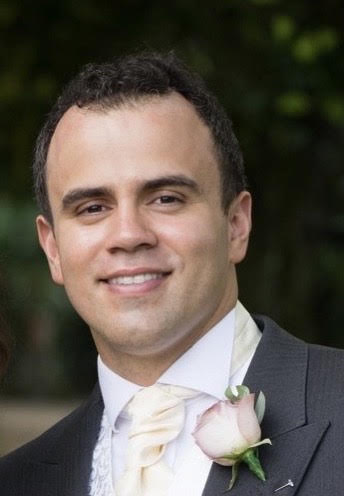 Oscar Garcia passed away peacefully on September 19, 2021 in Phoenix after a courageous battle against brain cancer for over five years. He was born in Yonkers, NY to mother Clara and father Oscar, with elder sister Joanna and younger brother Matthew.

After graduating from Roosevelt High School, where he also excelled as a football player, he studied first at NYU Tisch School of the Arts before transferring to and graduating from the University of Miami. An MBA from NYU Stern School of Business followed, and this brought him to Phoenix after his recruitment by Intel. Education and professional achievements were important to Oscar – but even more important were the friendships he made along the way.

In 2014, Oscar married Ellie who he had met in New York in 2010. They built their home in Phoenix and quickly became connected to their community. 2018 saw the arrival of their beloved son Theodore.

Oscar lived so much life in a really short span of time and was loved by many. He lived his life with integrity, determination and passion, always open to new experiences and challenges. He had a huge heart and cared deeply about family and friends. Oscar was dynamic – an avid traveler, sports fan, salsa dancer, ketogenic diet aficionado, lifelong learner, handyman, health fanatic, and a Knight of Columbus. He had a smile for everyone and lit up the room with his presence.

Brain cancer did not define Oscar but he did embrace it and even turned it into a positive. Upon diagnosis, Oscar immersed himself in researching the nature of and treatments for the disease, and this influenced radical changes to his lifestyle. Many who have followed his journey have been inspired. He explored all avenues alongside the best medical team anyone could ever ask for. Despite his medical challenges, Oscar fulfilled his dream of making a pilgrimage to Lourdes, the pinnacle of his spiritual journey, returning home only days before his passing.

He was an amazing father, husband, son, brother and friend – our Superman will be sorely missed.

Private services were held by family.

Oscar was passionate about progressing research into brain cancer and support for those impacted by the disease. Instead of flowers, donations can be made to the Barrow Neurological Foundation (https://www.supportbarrow.org) or to the Gray Matters Foundation (https://graymattersfoundation.org).

Offer Hugs From Home Condolence for the family of GARCIA, OSCAR