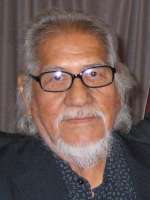 83, of Phoenix, passed away peacefully at home on August 10, 2013, after an 8 month battle with cancer.  He was born in Phoenix on February 17, 1930.  Dad attended St. Mary’s Catholic High School before proudly serving his country in the US Navy at the age of 17.  He returned and graduated from St. Mary’s where he met and later married our mother, Lucy Magdaleno.  Dad retired from the Phoenix Fire Department ending his 23 year career as one the first Mexican-American Captains.  He attended ASU, also owned several businesses including: an insurance agency, Busy Realty and construction company.

He was very hard working, intelligent, witty, loving and a dedicated father and grandfather.  He was very generous often helping strangers in need. He was preceded in death by his wife of 58 years, Lucy M. Garcia and their infant son. Salvador is survived by his children; Ellie (Bill), Bobby (Dorothy), David, Michael, Lorrie (Sam), Annette (Bobby), Sally (Danny), Sal (Melissa) and Bianca, 18 grandchildren and 5 great-grandchildren. The family wishes to thank all of the physicians who treated him at St. Joseph’s Hospital.  In particular, Dr. Ross Bremner and the Heart and Lung Institute. Visitation will be held on Thursday, August 15, 2013 from 6-8 PM, with a Rosary at 7:00 PM at Whitney & Murphy Funeral Home, 4800 E. Indian School Road, Phoenix.  Funeral Mass will be Friday, August 16, 2013 at 10:00 AM, St. Mary’s Basilica, 231 N. 3rd Street, Phoenix, AZ.  Interment to follow at St. Francis Catholic Cemetery. In lieu of flowers, donations can be made to the UPFFA Cancer Fund at 602-277-1500 (Phoenix Fire Local 493).

Offer Hugs From Home Condolence for the family of GARCIA, SALVADOR D.