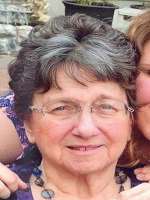 Under the watchful and caring eyes of the wonderful staff at Silverado Senior Living in Scottsdale, Ginny passed on after a long illness. She is now with her husband, Bob, her sons, David and Ken, her mother, Margaret (Matz), Folz, her father, Tony Folz and her brother, Bill Folz who all preceded her in death.  Ginny was born in 1932 in Evansville, Indiana.  Her family fled the Midwest winters to prosper in Phoenix in the shadow of the Brophy Chapel Bell tower across North Central Avenue.  Ginny attended St. Francis Xavier Grammar School and graduated from Xavier High School later marrying the love of her life Bob Geare.  While being a full-time mom to her 7 children, she was also a very involved swim team, little league, and neighborhood mom.  She enjoyed keeping in touch with old friends through her many years as a Xavier Alumni class representative.  She is survived by her five children; Steve Geare, Toni Lewis (Dan), Margaret McNeilly (Don), Julie Thrush (Andy), and Ann DeSantis (John), plus eleven grandchildren, three great-grandchildren and a very large extended family.  Ginny leaves behind a legion of friends and family who live on with her in their hearts with many fond and loving memories.  A Memorial Mass will be held in her honor at St. Francis Xavier Church on 4715 North Central Avenue at 2:30pm on Saturday, February 2, 2013 preceded by a Visitation at 2:00pm.  In lieu of flowers, donations can be made to Hospice of the Valley, 1510 E. Flower Street, Phoenix, AZ 85014 or Silverado Foundation, 9410 E Thunderbird Rd Scottsdale, AZ 85260.

Offer Hugs From Home Condolence for the family of GEARE, VIRGINIA LEE