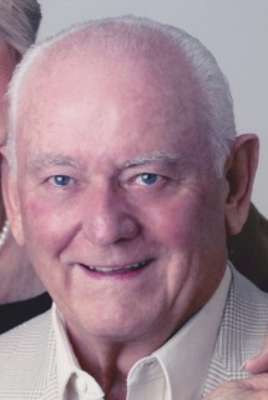 Thomas Anthony Geis passed away peacefully with his beloved wife by his side on January 31, 2017. “Tom” as everyone knew him was 83. He was born February 3, 1933 in Dayton, Ohio. His family moved to Phoenix in 1949 where his father, Walter Geis stated they could play golf 365 days a year. Tom was a passionate golfer with a low handicap and 8 holes in ONE’S. A past member of Arizona Country Club and White Mountain Country Club, were places Tom always loved to be on the golf course. Married in 1954, for 62 years, to the love of his life Beverly, together they founded Geis Sales, Inc. He was a Manufacturing Rep. for an electrical sales company for over 30 years in Phoenix. He graduated from Arizona State College in Tempe in 1956. He is survived by his wife Beverly and three daughters Kimberly Geis, Jennifer Mattingly, husband George and Tamara Swanson, eight grandchildren and fourteen great grandchildren. Their oldest daughter Cynthia Rawlings preceded Tom’s passing in 2014. Funeral Mass will be celebrated at 10:00 a.m. on Saturday, February 18, 2017, at Saint Maria Goretti Catholic Church, 6261 N. Granite Reef Road, in Scottsdale. In lieu of flowers, the family requests donations be made to Hospice of the Valley, 1510 E. Flower Street, Phoenix, AZ 85014. Arrangements entrusted to Whitney & Murphy Funeral Home.

Offer Hugs From Home Condolence for the family of GEIS, THOMAS ANTHONY