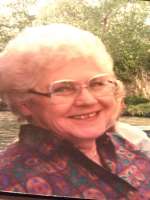 Mary Jane was born October 21, 1925, in Grand Rapids, Michigan.  She moved to Phoenix in 1955 and had been living at her Phoenix home since 1957.  Married to Edward J. Carey in 1957, and remarried Charles Gercke in 1976, she is survived by her son, Edward J. Carey II and her extended Gercke family, Barbie Moody, Ron Gercke and Chuck Gercke. Mary Jane worked as a PBX Operator during her career, as well as, a secretary for the Sperry Rand Corporation of Phoenix in the 50’s and 60’s, where she met and married Edward J. Carey.  Their only son Edward was born in Phoenix and attended Camelback H.S. and Northern Arizona University.

Mary Jane was a past member of St. Thomas the Apostle Church. Her Hobbies included her paintings and artist drawings and cooking.  Memorial service will be held, Monday January 21, 2013 at 1:00pm at Whitney & Murphy Funeral Home at 4800 E. Indian School Road in Phoenix.

Offer Hugs From Home Condolence for the family of GERCKE, MARY JANE