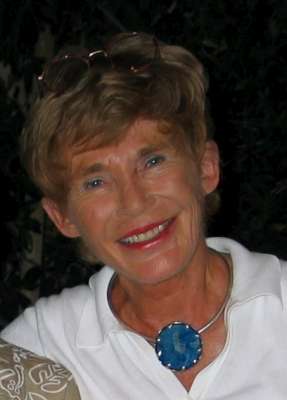 Dr. Carolyn Frances Gerster, a loving mother to her sons and a devoted wife, passed away quietly in her sleep during the early morning hours of Thursday, January 28th, 2016, at her home in Paradise Valley. Although not quite a native, Dr. Gerster was a long-time resident of Phoenix, who returned to the Valley to raise a family and build a successful medical practice, specializing in internal medicine and cardiology, in Scottsdale. She was born January 15th, 1928 in San Francisco, California, the only child of Evelyn and Richard Taylor. Sadly, the marriage did not last, and so in the early thirties, when she was only four or five, Carolyn moved with her mother to the City of Phoenix, hoping to cure both Carolyn’s respiratory problems, and to find steady work for her mother in job market that was stifled by the nation’s crumbling economy. Soon, her health was restored, but as the Great Depression ran its course, one of the lessons it taught was that education increased one’s chances for success. Bright and eager for the challenge, Carolyn finished grade school by 1940 and then graduated from high school in just three years, subsequently receiving a scholarship to the University of Oregon to study medicine. Seven years later she had completed her undergraduate degree and medical school, graduating in the summer of 1950 at the age of 22. She interned at Queens Hospital in Honolulu before taking a trip around the world that left her with a love of travel that she was never able to shake. After serving one-year residencies at hospitals in Santa Barbara and Portland, she joined the United States Army as a Medical Service Officer, attaining the rank of Captain. While most of her two-year service was stateside, she also was stationed in Paris, and at the U.S. Army Hospital in Frankfurt, Germany. In August of 1957, a chance visit to the base hospital by Dr. Josef Gerster, a former German intern, led to a whirlwind romance, a courtship that spanned oceans, continents and language barriers, and culminated with an accepted proposal in a Cleveland, Ohio Ratskellar. Carolyn and Josef were married in February of 1958, in Portland, Oregon, and moved back to her childhood home of Phoenix in 1959, where they built a life, started a practice, and raised five sons. Over the next fifty-plus years, she pursued life with a passion and devotion that was extraordinary. She excelled as a physician, and became a member of several professional organizations including the American College of Cardiology and the American Heart Association, and she served on the Arizona Board of Medical Examiners from 1987 to 1992.   She served her community as well, dedicating countless hours as a volunteer at St. Vincent de Paul’s Medical Clinic. And for her, most importantly, she was a fervent and fearless supporter of human life, believing it to be one of the cornerstones of a physician’s duties. In 1971, she cofounded the Arizona Right to Life Committee, serving over the years as its President and Chairman of the Board. When federal laws changed in 1973, she went national, serving as the Arizona Director to the National Right to Life Committee (NRLC) in 1973, as its Vice President from 1973-1975, as its Chairman of the Board of Directors from 1975-1978, and as its President from 1978-1980. In 2011 she was honored as a member of the NRLC Board as a Delegate Emeritus. As a result of her dedication to this cause, she spent thousands of hours travelling all over the nation and abroad to speak to church groups, politicians, universities, graduate schools, legislatures, and U.S. Senate Committees on abortion and euthanasia. To her family, she will be loved for her devotion to her home, her husband, and her sons, where the same passion that drove her medical and political convictions was exemplified in her dedication to church, homework review and formal weekend dinners. Fittingly, she was selected as Arizona’s Mother of the Year in 1987, but missed taking the national award. She will long be remembered and respected by family, friends and foes.   Sadly, she was greatly troubled by the recent death of her husband Josef, with whom she shared a marriage of nearly 58 years. She is survived by her five sons John (Sue), Eric (Darlene), Kurt (Kristine), Mark, and Karl (Joanne) and ten grandchildren. In lieu of flowers, the family suggests that donations be made to Hospice of the Valley at hov.org. Memorial Mass will be held at 10:00 am on Friday, February 5th, 2016 at Our Lady of Perpetual Help Catholic Church, 7655 E. Main Street in Scottsdale, Arizona. Arrangements entrusted to Whitney & Murphy Funeral Home.

Offer Hugs From Home Condolence for the family of GERSTER, DR. CAROLYN FRANCES