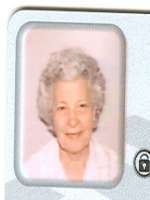 was born in Portland, Oregon on March 31, 1921. She was the daughter of Italian immigrants, Angelo and Eletta Pippi. The family returned to Italy when Irma was 18 months old. Irma lived in Montecatini Terme, near Florence, Italy. In 1941, at the age of 20, she married Ovidio Giuntoli. In 1953 she came home to the United States with her husband Ovidio and their 12 year old daughter Alba. They settled in Phoenix, AZ. In 1961 they opened Ovidio’s Restaurant where the family worked side by side for several years. Irma also worked for Motorola for over 20 years. Since her retirement, Irma has spent her time traveling, gardening and sewing. Her greatest joy was spending time with, and tending to, her family and friends. Irma died on April 28, 2010 surrounded by her family. She is survived by her daughter Alba Giuntoli Clay, granddaughters Juliana and Gina, grandsons in law Steven and Richard, great-grandchildren Joey, Natalie and Augie. A devout Catholic, Irma was an example of how to love, how to raise a family, and how to be a friend. Rosary will be held at 9:30 am, Monday, May 3, with a Funeral Mass at 10:00 am, at Ss. Simon and Jude Cathedral, 6351 N. 27th Avenue, Phoenix. Interment will follow at St. Francis Catholic Cemetery. Instead of flowers please consider a donation to Hospice of the Valley.

Offer Hugs From Home Condolence for the family of GIUNTOLI, IRMA