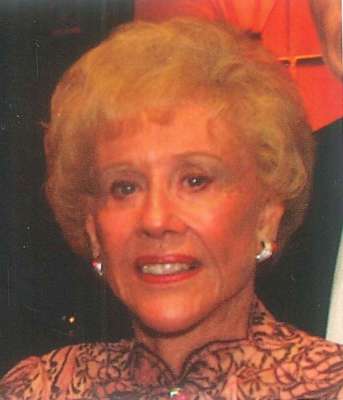 Passed away June 14, 2016. She was born July 9, 1920 in Moncton, New Brunswick, Canada to Annie and Reginald Rogers. She was educated in Canada. Upon Canada’s entrance to World War II, many young American men went to Canada and got their wings with the R.C.A.F. Among them, one, Bert Saunders, Pat’s first husband. After Pearl Harbor, these men transferred back to the U.S. and ultimately, arrived at Luke Air Force Base during the Korean War and on to Okinawa where Bert was killed in a plane crash.

Pat and her two young daughters returned to Phoenix. Pat met and married Leonard Goldman. Together, they shared a life of travel and charitable interests. Her commitment to these interests has spanned over 40 years and she received a Spirit of Philanthropy Award from the Barrow Neurological Foundation. She served as chairwoman of the Barrow Women’s Board, leading fundraising campaigns for the construction of the 3rd Avenue Bridge connecting St. Joe’s Hospital to the parking garage, supported construction of the Neuroscience Research Center and renovation of the Goldman Auditorium. Other charities received her attention; among them Cancer, Heart and many others. In 2001, she renewed her friendship with Robert Greening, who became her constant companion and shared in her love of travel, charitable interests and friendships until his death in 2010.

Offer Hugs From Home Condolence for the family of GOLDMAN, PATRICIA L. “PAT”