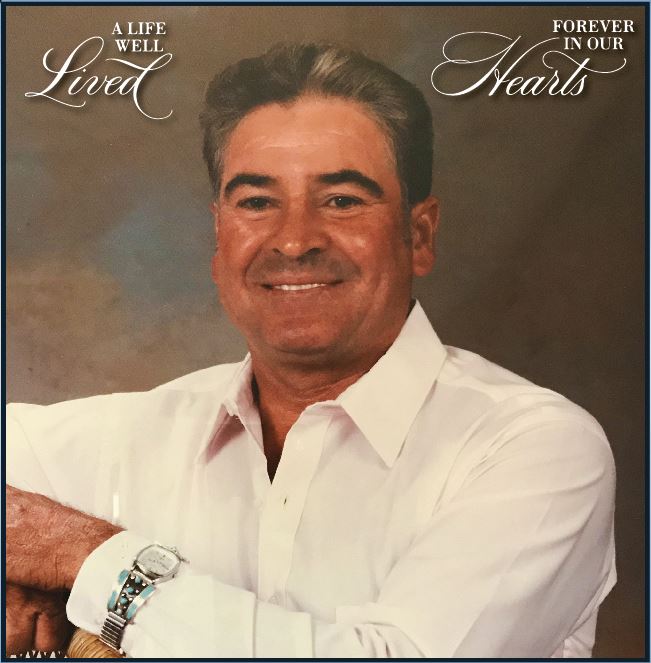 Our beloved father, grandfather, and great-grandfather, Jimmie Gomez, passed away on Sunday, December 8th, 2019 at his home in Phoenix, Arizona. He was 84 years old. He is survived by one brother, Angel Gomez, and two sisters, Marcelina Erramuzpe and Olivia DuVall, 9 children, 26 grandchildren, and 1 great-grandchild.

Jimmie Gomez was born in Solomonville, Arizona on July 8th, 1935. He was named at birth, “Santiago” Gomez, but he was called “Jimmie” when he started grade school. He was the 8th child of 11 children of Vidal Gomez and Jessie Grijalva Gomez. He grew up in Solomonville and Safford working with his family on their farms and ranches. He graduated from Safford High School in 1953, and then served in the Armed Forces’ Boot Camp.

After he completed his military service, Jimmie spent the remainder of his life in farming and ranching. He purchased his first farm in 1960 in Palo Verde, Arizona, where he grew alfalfa and cotton. He later went into raising hogs, cattle, goats, and other livestock at his ranch in Tolleson, Arizona.

He was a man of true grit who loved his children, grandchildren, and great-grandchild. He was always extremely proud of their many accomplishments!

During the last few years of his life, as his health declined, Jimmie moved to Phoenix to be closer to his family in the Phoenix area. He was often seen with his sons, Denny Gomez and Grant Gomez, at their many western horse events wearing his jeans, western shirt, and cowboy boots!

Offer Hugs From Home Condolence for the family of GOMEZ, JIMMIE