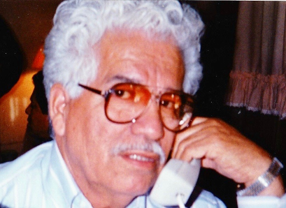 He was extremely caring toward all the little ones. Frank was known as “Pancho” to his family and friends. He belonged to the AZ Laborers, Teamsters and Cement Mason, local No. 395. He was honorably discharged from the US Army in August of 1947. He coached his daughters’ softball team. He always enjoyed baseball and was a big fan of the Diamondbacks. Frank had a deep appreciation for traditional Mexican music and delighted in playing his harmonica. He was surrounded by his devoted and affectionate family up until he passed and will be missed by all.

Visitation will be held at 9:00 A.M. with a celebration of his life at 11:00 A.M. on Saturday, February 22, 2020 at Whitney & Murphy Funeral Home, 4800 E. Indian School Rd, Phoenix. Interment will follow at St. Francis Cemetery. Condolences may be expressed at www.whitneymurphyfuneralhome.com

Offer Hugs From Home Condolence for the family of GONZALES, FRANK L.