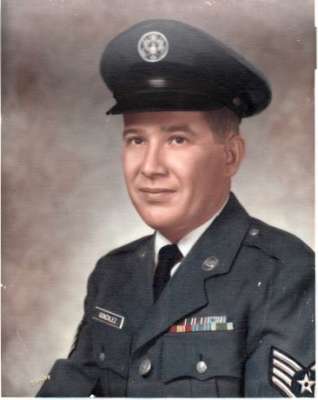 74, of Glendale passed away peacefully on February 1, 2015. He was born in Premont, TX August 9th, 1940.   He is survived by his two daughters, Monique Richardson and Veronica Gonzalez; 5 grandchildren, Lindsey Scheckel, Cecelia, Angelo, William, and Joseph Cravens; and 2 great grandchildren, Eli Cacy, and Hailey Scheckel. He was a United States Air Force Veteran, and retired employee of the United States Post Office. He was very proud to have served his country. He was blessed to be reunited with his wife and two son’s. Visitation will be held from 10:00-11:00 am, with a Scripture Service at 11:00 am Saturday, February 7, 2015 at Whitney & Murphy Funeral Home, 4800 E. Indian School Road, Phoenix. Interment will follow at St. Francis Catholic Cemetery, 2033 N. 48th Street, Phoenix.

Offer Hugs From Home Condolence for the family of GONZALEZ, LUZ SR