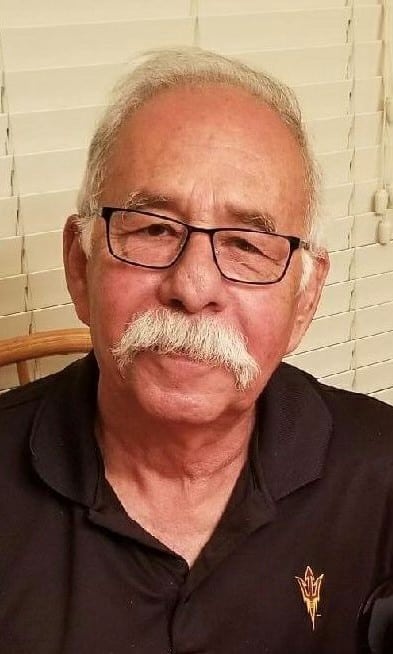 Bill was born and raised in Clifton, Arizona. He attended and graduated from Clifton High School, where he was a gifted athlete. His family owned and operated El Ranchito tortilla factory. During his time in Clifton, he worked in the carpenter shop for Phelps Dodge mining company, coached little league, and belonged to the Social Club and Clifton Trojan boosters.

In 1986, he and his family moved to Chandler, Arizona. Bill cherished personal relationships. His work was the perfect vehicle to pursue that passion. He made lasting friendships while working at Arizona State University (ASU) and Gila River Casinos. In 2010, Bill retired to be a full-time grandpa, and his name forever changed to Bob.

He had many passions. He was a diehard sports fan, music enthusiast, and family man. He was quick to know the names of players, stats, and music artists. Most of all, he loved his family and his friends. He knew everyone’s nicknames and often gave them. He enjoyed celebrating family birthdays, holidays, attending his grandchildren’s activities and catching up with friends. He will be deeply missed for his kind nature, supportive words, and wonderful sense of humor.

Catholic Mass in celebration of Bill’s life is being held on Friday, January 13, 2023 at 10:00A.M. at the Conventual Church of Our Lady of the Angels at the Franciscan Renewal Center, 5802 E. Lincoln Drive, Paradise Valley, Arizona 85253.

Offer Hugs From Home Condolence for the family of GONZALEZ, WILLIAM PAUL