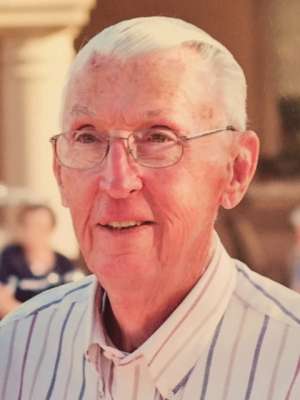 Gib, 86, passed away peacefully at Ryan House on Thursday, July 14, 2016, after a courageous battle with Alzheimer’s. He loved spending time at the beach with his family, golfing with friends, volunteering, traveling to Colorado, ice cream and Notre Dame football. He was generous, loving and kind to everyone he met and will be remembered for his genuine interest in others. Gib was born on July 23, 1929 in Chicago, IL to Judge Gibson and Dorothy Gorman. He attended DePaul University and Arizona State University. After graduation he was a coach, teacher and Real Estate Appraiser in Chicago. Gib married his devoted wife Jean in Chicago on July 5, 1958. He continued his career as an Appraiser after moving to Phoenix in 1964, and later become a Mortgage Banker. They have four children, Gibby (Andrea), Susan (Bill) Hoover, Danny and Kathleen (Dan) Moroney. He was blessed with six loving grandchildren, Hunter, Paige and Hayden Hoover, and Kirby, Molly and Shannon Moroney. Gib was a devout Catholic and involved with the Men’s Club and St. Vincent de Paul at St. Thomas the Apostle Catholic Church. He was an extremely loving and patient husband, father and friend and will be missed by all who knew him. Gib is survived by his brother Tom. He was preceded in death by his mother and father, sister Dorothy Mary Webber and brother Harry.Prior to entering Ryan House, Gib received kind and loving care from the nurses and staff at Honor Health Scottsdale Osborn Hospital for which the family is extremely grateful.

Offer Hugs From Home Condolence for the family of GORMAN, GIBSON EDWARD