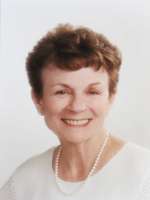 Born February 22, 1925 – Born to Eternal Life April 11, 2012. Patricia Marie Owens, the daughter of Marie Kane Logan and Edward James Owens came into the world in Sioux Falls, South Dakota. She would spend the remainder of her childhood in Grand Forks, North Dakota. She attended Sacred Heart Academy on the East Side. The man of her dreams, Michael Vincent Gorman, walked into her life when he used to walk her and his little sister to grade school. They reconnected in later life when he was home from Northwestern University. They were married on June 1, 1946 in Minneapolis and raised their four daughters in Moorhead, Minnesota. Her life revolved around being a homemaker and mother to her girls, Kathleen, Diane, Nancy, and Colleen. Pat and Mike made their home for years in Moorhead, then Sioux Falls, South Dakota. They moved to Phoenix with their girls in 1968. Patty was a devoted wife, mother, sister and friend. She and Mike loved music and “danced their legs off” (as she used to say) from the time they met to later years at Dixieland Jazz Festivals all over the United States and Canada. The musicians all knew them by name and loved to watch them dance. Patty was a beautiful entertainer and because of her husband’s business in sales she entertained people from all over the country. Everyone was treated with absolute love and grace in her home. Patty’s remaining family includes her three daughters Kathleen Gorman Rice (Jimmy D. Rice), Nancy Gorman Rogers (James D. Rogers) and Colleen Will (Jeffrey S. Will). She is also survived by her beloved sisters “The Spritzer Sisters” Mary Ann Bushaw and Jane Gunther (Dave). Her grandchildren include: Nicole Mabante, Micah Mabante, Shannon Rice Galasso (Michael), Shaun Rice, Meghann Will, Clare Will and Michael Vincent Gorman Rogers. She was preceded in death by her beloved husband Michael Vincent Gorman in 2003, her daughter Diane Marie Mabante in 2004, her brother in law Michael J. Bushaw in 2009, her brother John Logan in 2011, and her granddaughter Keleigh Kathleen Will in 1987. Her devout Catholic faith sustained her and she spent an hour a week in adoration for many years. Her 58 years of marriage were a source of great pride and joy for Patty. The legacy of love she left her children and grandchildren are exemplary. She suffered a lengthy battle with Alzheimer’s, yet her trademark spirit never really left her. We know she danced right through the gates of heaven and into the arms of her cherished husband. The Gorman Girls will forever be grateful to Adelina, Marcel, Joseph and Dehlia who lovingly cared for Mother at “the angel house”. In her last months, Hospice of the Valley offered special support and care. We are very grateful, especially to our dear friend Eileen Sazama. Please remember Patty and smile whenever you hear “When Irish Eyes are Smiling” her all-time favorite Irish song. There will be a private funeral at St. Patrick’s Catholic Church in Scottsdale. Arrangements entrusted to Whitney & Murphy Funeral Home. Donations may be made to Hospice of the Valley in her name.

Offer Hugs From Home Condolence for the family of GORMAN, PATRICIA MARIE