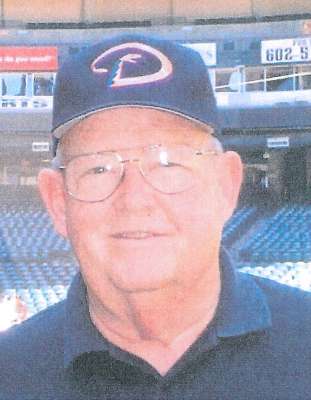 Loving husband, devoted father, grandfather and proud USAF Veteran, went to join the Lord on January 4, 2016. He was born in Phoenix on February 10, 1931 to James Merle and Geraldine (Nee Talley). James was baptized at Brophy Chapel, graduated St. Mary’s HS in 1949 and attended ASU in pre law. He was discharged from the Air Force as S/Sgt in 1951. Jim earned his Sgts stripes by playing on the base basketball team. He began work at O.T. Judy, then at Electrical Distributing Co. for Sam Shurgin at 16th Street and Washington in Phoenix until he enlisted. Upon his discharge, he returned to Electrical Distributing, then Zinsco and Babbitt Brothers in Flagstaff. Sam persuaded him to return to Electrical Distributing in 1969. Jim relocated to Southern CA as a Regional Vice President after AMFAC Electrical Distributing purchased it in 1974. He married his high school sweetheart Diana Dehner in 1951. They were blessed with four children. After his marriage ended, he met Joy Daniels at AMFAC in CA and were married in 1981. He retired from AMFAC in 1988 and opened Anchor Electric Supply with partner Derek Loft. In 1993, Jim retired again and moved back to Phoenix. He loved to travel and drive Sprint cars and motor homes. Jim also enjoyed Boy Scouting and the Electric League. He and Joy traveled across the US, visited Europe, Canada and Mexico. He enjoyed tailgate parties and St. Mary’s reunions. Jim was always active in church – as an altar boy at St. Matthew’s who never forgot his Latin, to president of Christ’s Church of Peace in Mesa. He is survived by his wife Joy, children Larry (Brenda), Cay, Terry and Jay, grandchildren Stephanie Vega, Lindsay and Courtney Brown, Allan, David and Ashley Gowey and Rachel (Robert) Erickson and one great grandson, Cameron Vega; former wife Diana Lingnowski, sister Maryann (Tom) Grove, brothers-in-law Mark R. Daniels of Portland, OR and Curt W. Daniels (Karen) of Waukegan, IL; Aunt Margie Gowey of Eagar, AZ, many nieces, nephews, cousins and friends and members of Omniscope. He was preceded in death by his parents, sister Patricia Young and his brother Richard “Dick” (Fran) and Uncle Thomas Gowey. Visitation will be held from 11:00 AM – 1:00 PM, with a Rosary at 1:00 PM, and Funeral Service at 1:30 PM, Sunday, January 10, 2016 at Whitney & Murphy Funeral Home, 4800 E. Indian School Road, Phoenix, AZ. Burial will take place at Cedar Park Cemetery in Calumet, IL.

Offer Hugs From Home Condolence for the family of GOWEY, JAMES ELLIS