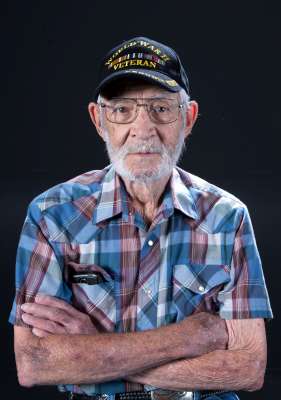 Alvin A. Graves Jr., passed away on May 31, 2016 in Mesa, AZ at the age 91. Al was the oldest of seven children, born Dec. 7, 1924, to Alvin and Pauline Graves in Kokomo, Indiana. He moved to Phoenix with his family at the age of 3. The family farmed where Sky Harbor Airport is now located. He served in WWII in the Fourth Armored Division, fighting in The Battle of the Bulge. After the war, he returned to his work as a watchmaker at Tom Chauncey Jewelers in downtown Phoenix. Al married Elaine McRaven in 1951 and they had 7 children together. He later started working for AirResearch Manufacturing Co. (Honeywell). Elaine died in 1964. Al met Phyllis Horner and married her in 1966. Raising 11 children together they moved to Lehi, AZ where they had farm animals and a huge garden. He retired in 1982 as a Project Manager. Al & Phyllis moved to Prescott, AZ and had a lot of fun traveling around the country gathering antiques to bring back to their shop. Al had an infectious laugh and enjoyed playing practical jokes. He liked fishing around Arizona and gardening but most of all he loved his family.

Offer Hugs From Home Condolence for the family of GRAVES, ALVIN A. JR.,