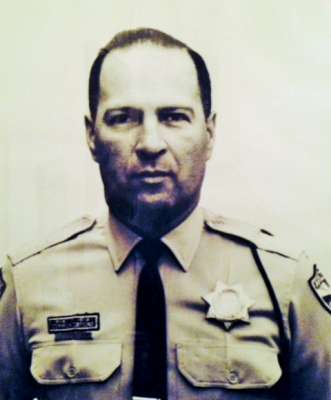 George Elias, 87, was born on April 10, 1927 in Ray-Sonora, Arizona and passed away on April 23, 2014. He was one of six children born to Richard and Edna Elias. George grew up in Phoenix, attending Emerson Grade School and graduating from North High School. After serving in the US Army, George spent his entire career working with the Arizona Department of Public Safety (DPS). He was an inspirational leader and beloved by his coworkers for his unselfish no-nonsense approach to work and life. His was an extremely humble man and deeply cared for his family and friends. He had a soft spot for animals, especially dogs and cats, and as a young man received much notoriety for raising homing pigeons. He had a keen mind and enjoyed reading the newspaper, watching the nightly news, and sharing his opinion on current affairs and politics.  He treasured fishing, camping, and spending a relaxing day at the horse track. Above all, he loved being with his family and joking around with his grandchildren; his quick wit could make them smile and laugh irrepressibly. George spent his final days surrounded by his wife Renate, his children Nancy Basila (Stephen Basila) and Beverly Elias, his grandchildren Kristina Basila, Shelley Flecky (Andrew Flecky), Tracy O’Haver (Michael O’Haver), and Stephen Basila Jr., his great-grandchildren Alex Flecky and Sam Flecky, his sister Sally Romley, and his brother Joe Elias. The family would like to give a special thanks to Gloria Elias, Tom Elias, and Ginger Sanford for their love and help. A celebration of George’s life will be held on Wednesday, April 30, 2014 at Whitney & Murphy Funeral Home, 4800 E. Indian School Road, Phoenix. Visitation will be held from 9:30-10:30AM with a Funeral Service at 10:30AM followed by Interment at Saint Francis Cemetery. The celebration will conclude with a 1:00PM luncheon at the Cedar Club of Arizona located at 1702 E. Northern, Phoenix, Arizona 85020. In lieu of flowers, the family asks that donations be made to Hospice of The Valley, 1510 E. Flower Street, Phoenix, Arizona, 85014.

Offer Hugs From Home Condolence for the family of ELIAS, GEORGE F.